Barefoot and Shirtless Teen in Bogotá

While on a free walking tour by Beyond Colombia, photographer Christopher Ryan found this interesting abandoned housing complex. It was not part of the tour, but the guide graciously pointed out, because Christopher had inquired about such places. She said that it was her understanding that it was the first apartment building built in Bogotá. According to the tour guide, up until then all of the housing had been individually owned (though still possibly attached) units. That story hasn’t been verified. In any case, it’s a very interesting building.

A family lives in one of the units and uses the others for hanging laundry and raising rabbits. The building was even used as a location for a scene in a movie at one time.

The model in this series is Adrian, who was 15 at the time of the photo shoot. This very handsome young man was the son of a lovely lady named Luna who was working at a salon where Christopher got his haircut during his visit. When he told Luna about his photography project, she pointed to Adrian, who was helping her sweep the floors at the time. And so this photo shoot came together.

Photographer Daniel Cely worked as a lighting assistant with Christopher on this project.

This is part of the project “Youth and Urban Decay” featuring beautiful children and teens in abandoned structures around the world.

As with many of Christopher’s shoots, feet are featured prominently in this session. 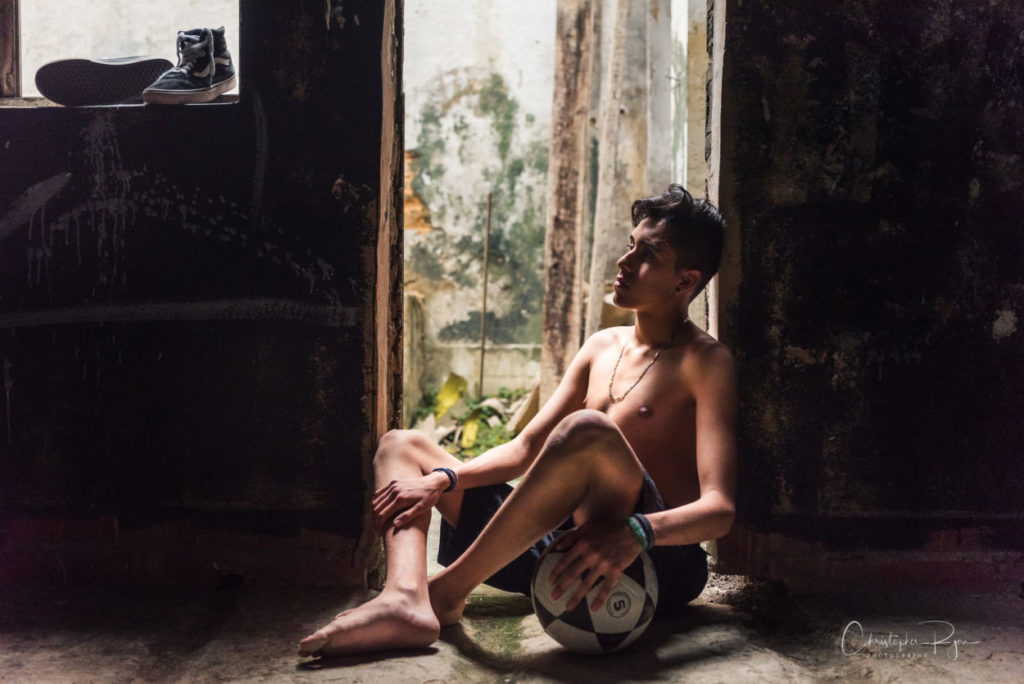 Adrian rests in a doorway of the partially empty complex, the light pouring in behind him. His sneakers sit on the windowsill above him, his soccer ball is held at his side. This image sets up the dream-like atmosphere of the rest of this shoot. 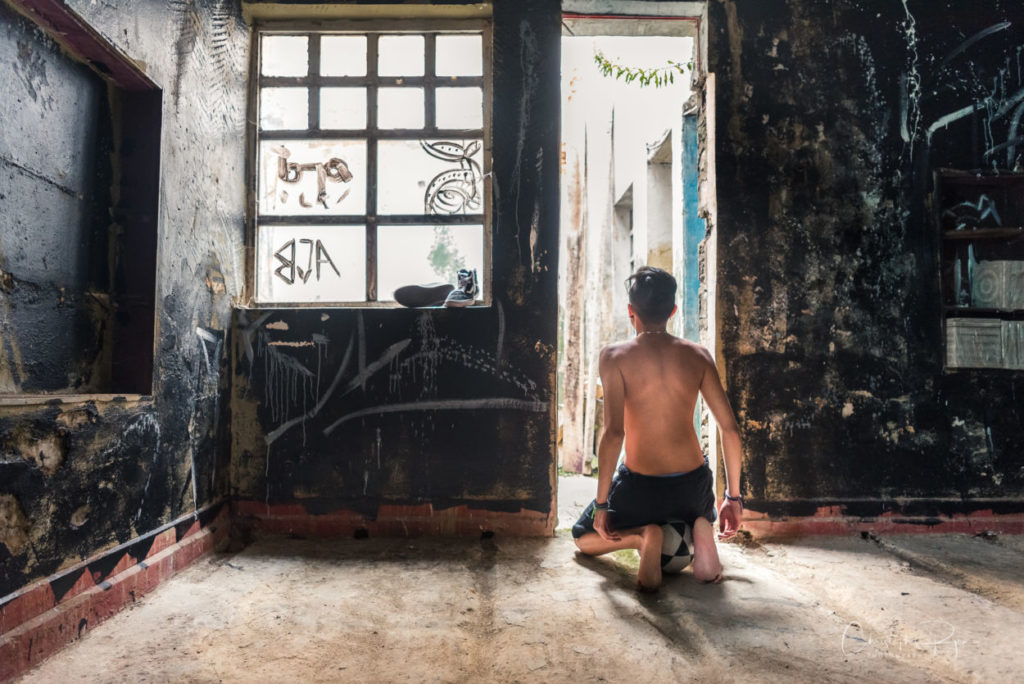 A very handsome teenage boy sitting on his soccer ball. It appears as if he is watching other boys place soccer and for some reason is unable to join them, though the definition of his exposed back suggests he is a great athlete. 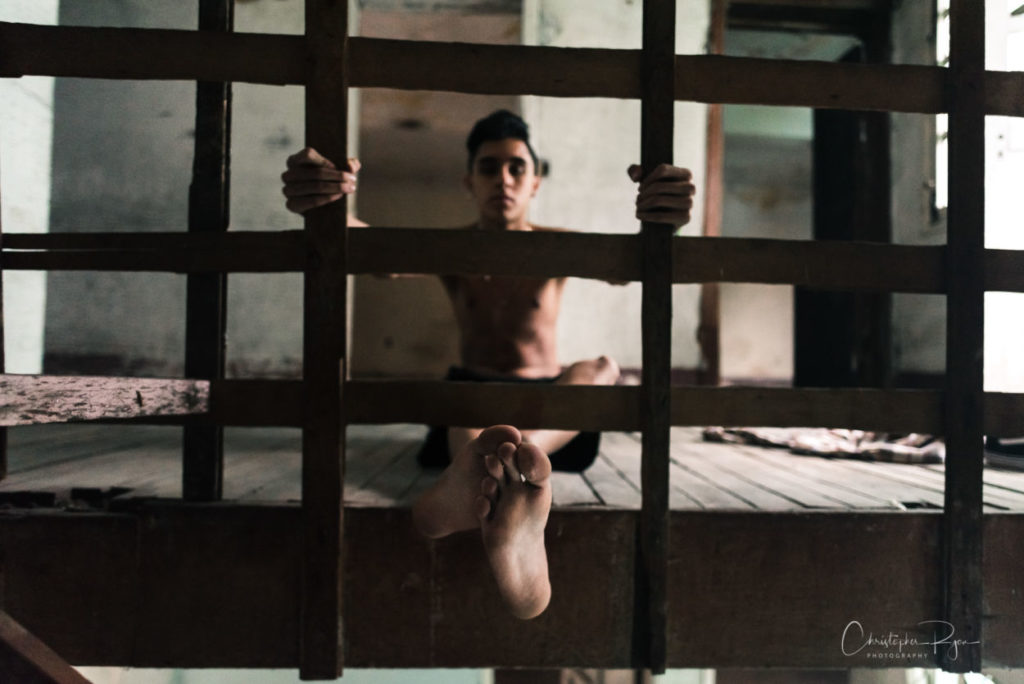 We see floorboards and the crumbling makeshift fence barely closing off this upper room above a stairwell. The soles of the feet are the focal point. The young male model appears almost trapped in another dimension or time. 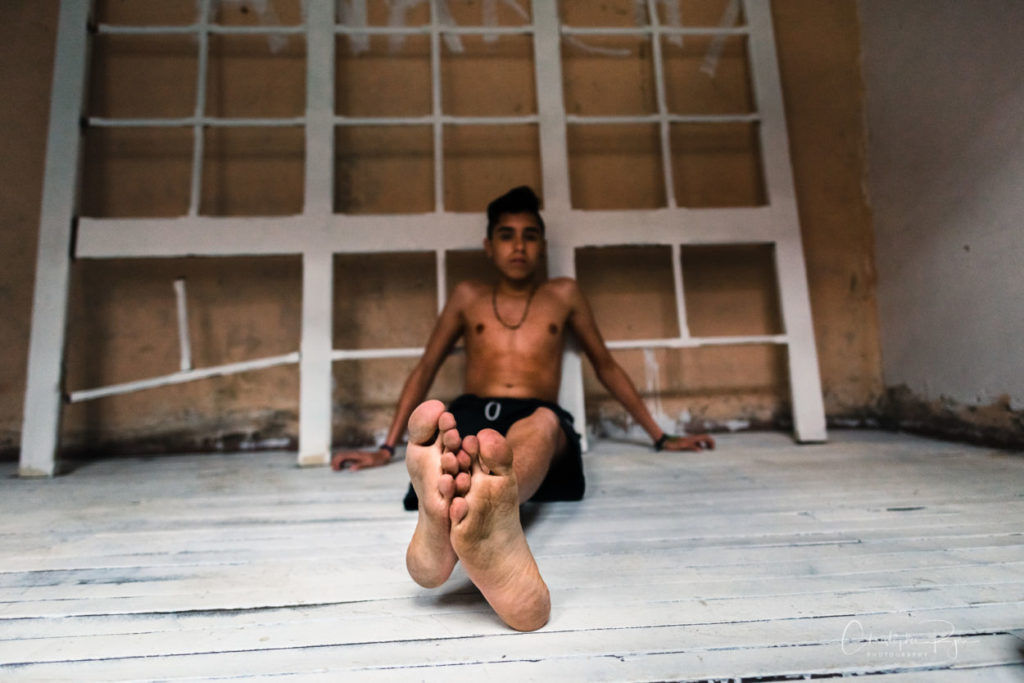 Another image suitable for “Focus on Feet.” 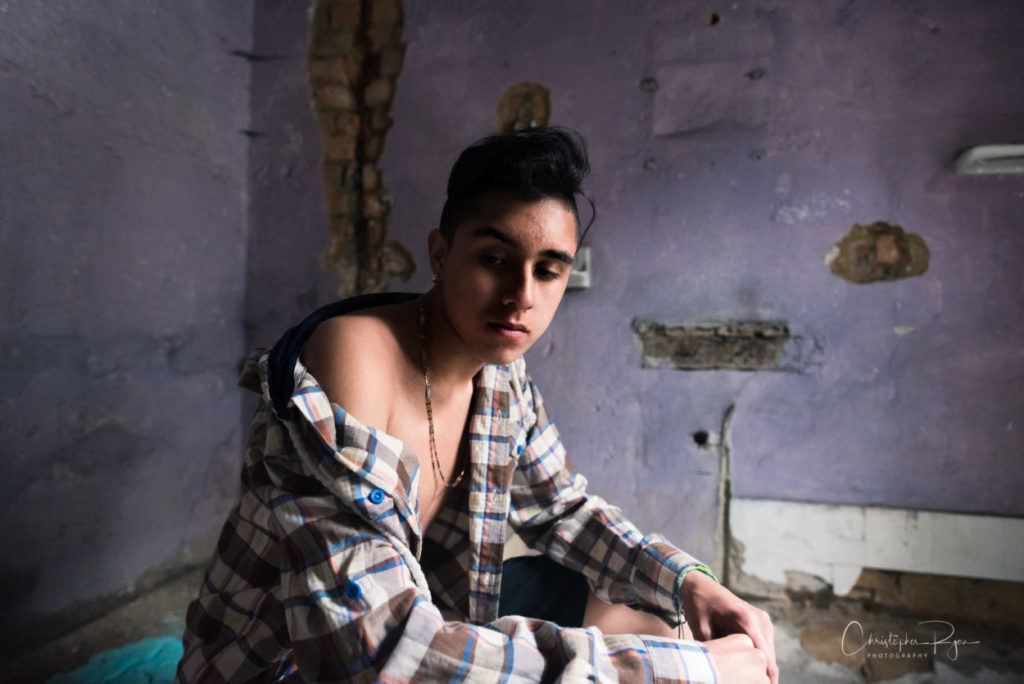 A handsome Bogotá youth rests in the abandoned apartment. The checks on his plaid flannel shirt echo the patterns on the exposed brick in the walls behind him. The line between the past and present almost appears to blur. 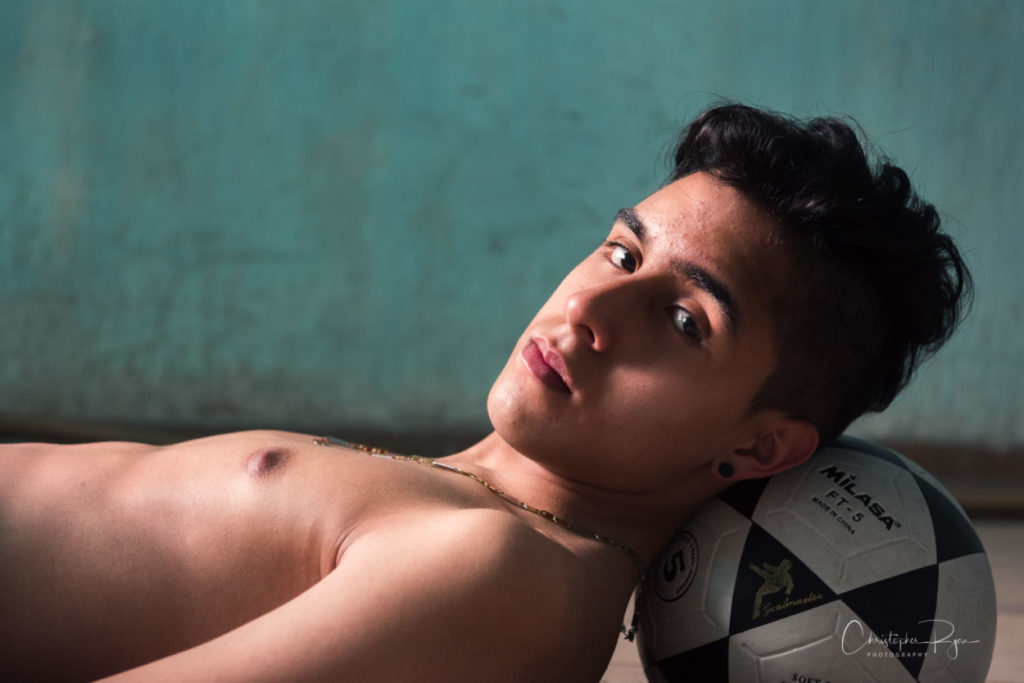 A shirtless Bogotá teen dreamily rests his head on his soccer ball. He looks as if he is resting after a match. 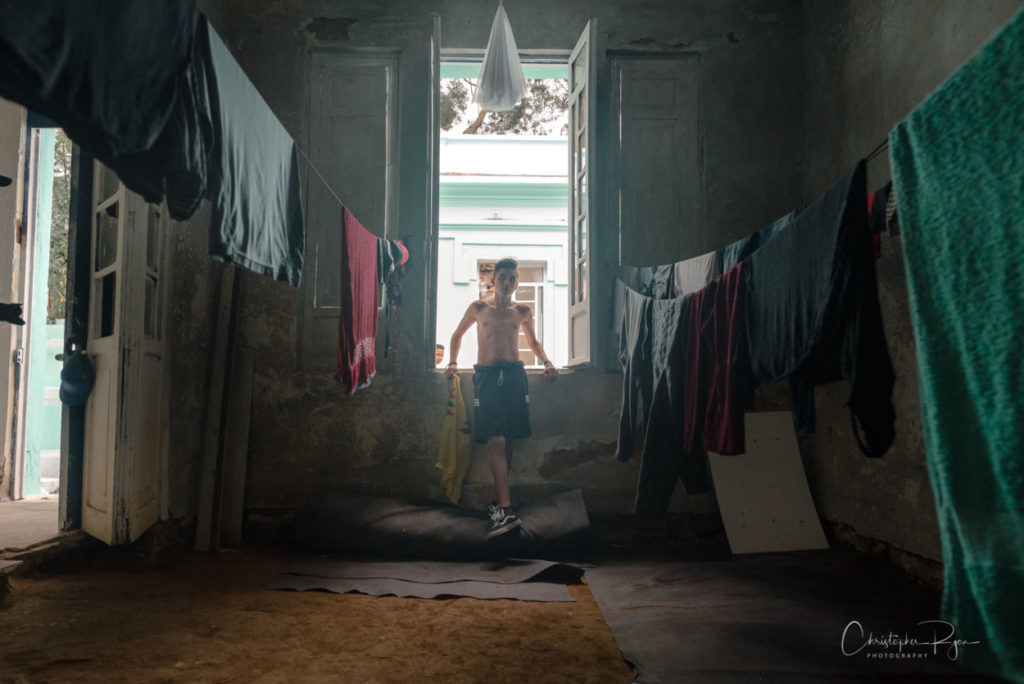 Laundry day in the crumbling Bogotá complex, a young man leans against a decaying wall, as light filters in the otherwise dark room. 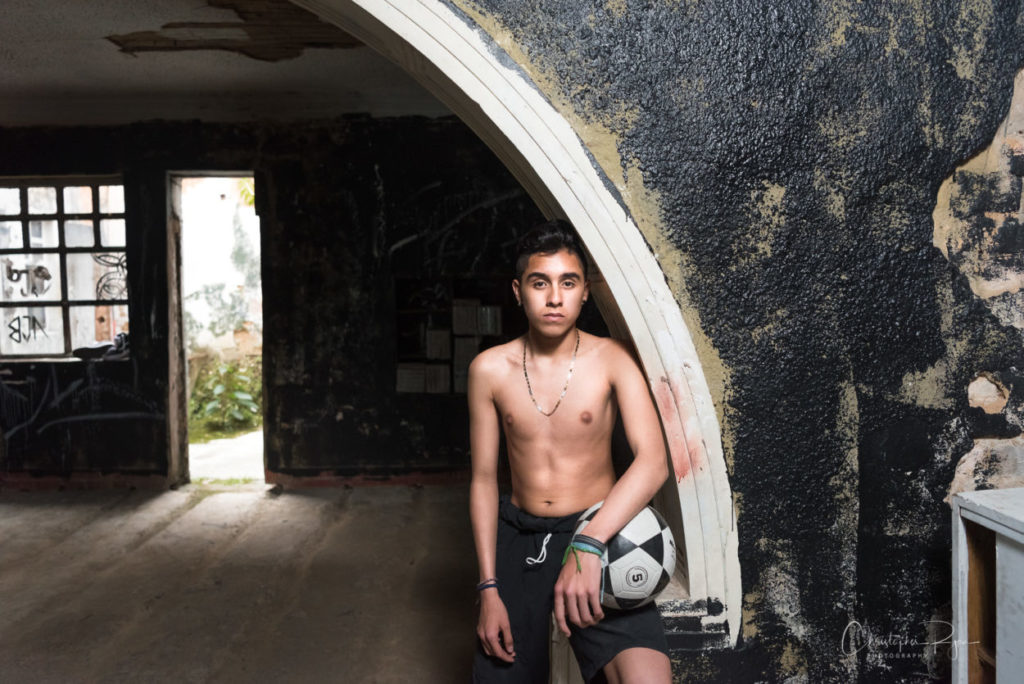 Adrian in the archway of the abandoned apartment. 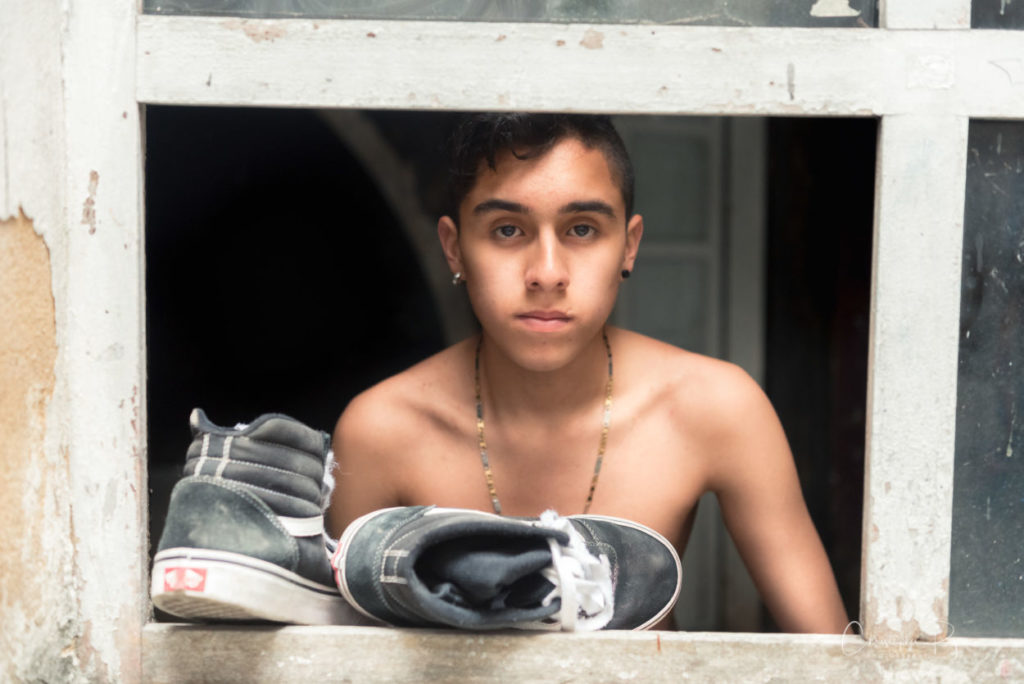 Adrian peers past his old sneakers in the windowsill, out into the alley between the two rows of abandoned buildings. 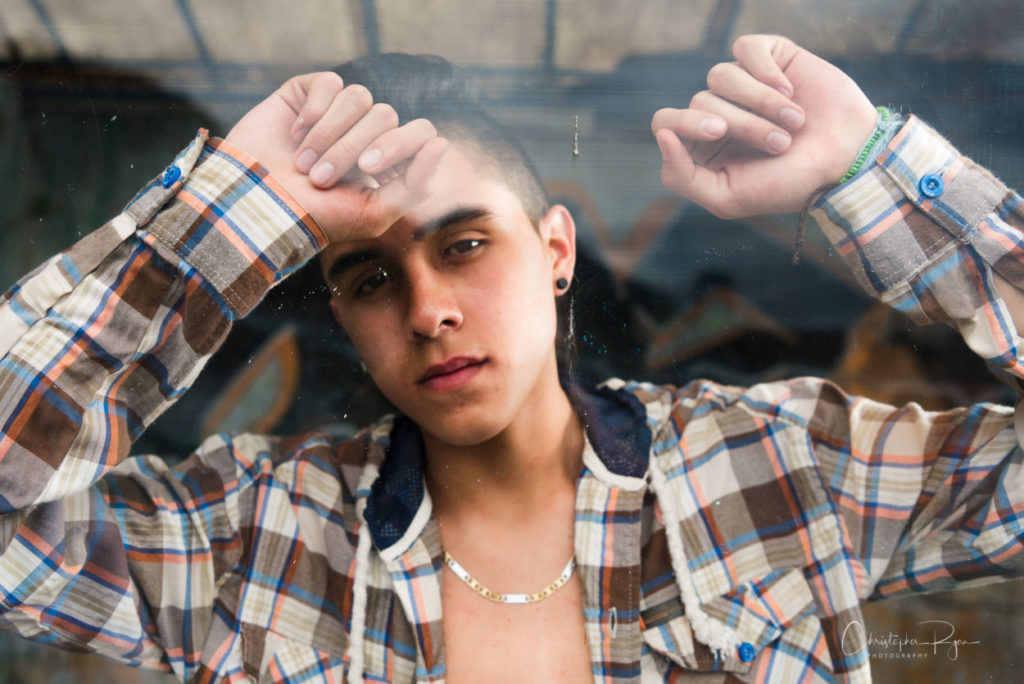 A small greenhouse sits on the roof of the old structure. Adrian looks out from inside the glass, once again blurring the lines between the crumbling past and a youthful future.