A few months ago I was having an online discussion with my cousin in a rather rural part of Alabama about doing a portrait shoot of her 9 and 11 year old children at an abandoned school in another rural part of Alabama not far from their home.  As always I asked questions about the kids to help gain some perspective.  During the conversation it came out that Emma, the older one was self-described as gender dysphoric.  Sadly I must admit I had to look the term up, though I had a good idea what it meant.  After reading about it I came up with the idea of portrait therapy for gender dysphoria, which was incorporated into this shoot from the Youth and Urban Decay project.

According to the American Psychiatric Association, “gender dysphoria involves a conflict between a person’s physical or assigned gender and the gender with which he/she/they identify.”  It manifests itself in a variety of ways and can lead to other situations such as depression.  The small rural town where Emma lives does not offer a plethora of support groups, therapists, or other outlets for effectively expressing oneself or providing emotional reassurances to the person.  My plan was to let Emma be a school boy for the photo shoot in the abandoned school to see what it might feel like. 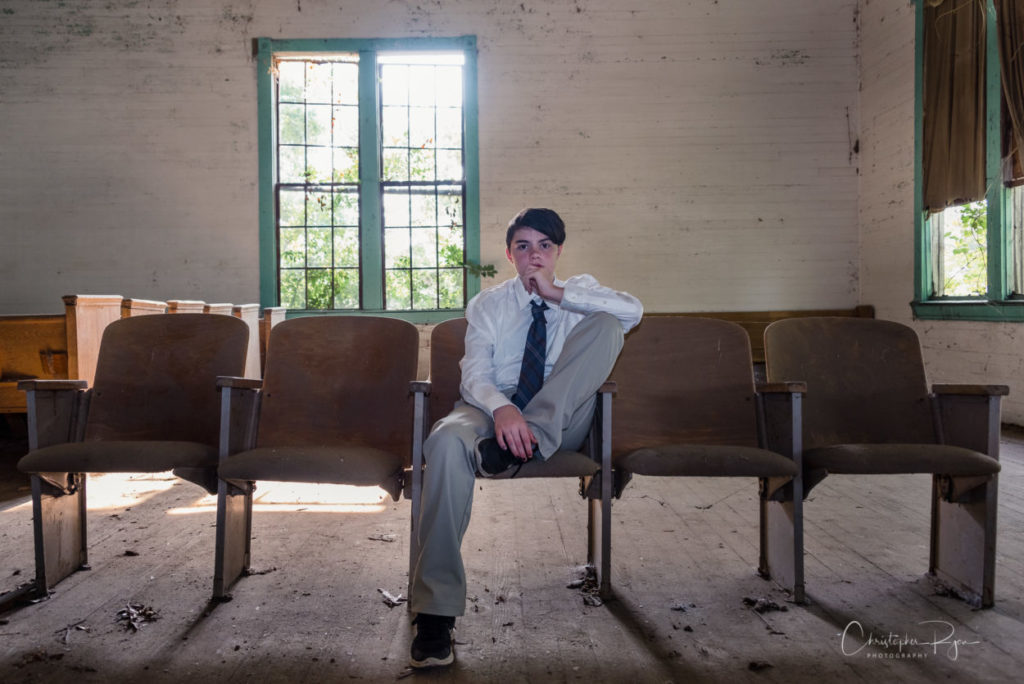 In the theater of life kids have a lot to think about. Being accepted for who you are should not be one of them.

One of the hardest part of writing this was avoiding the use of gender specific pronouns.  I’ve read a bit about this, and realize it can be a very important and sensitive subject to the person experiencing gender dysphoria.  Fortunately for me it is a bit easier as I live in a society where people are naturally called by the pronoun that matches their own gender identity.  In Thailand it is very natural for both kids and adults to call others “he” or “him” (in Thai of course), even if that person was assigned a different gender at birth.

There is a lot written about non-binary pronouns including this article on Huffington Post. 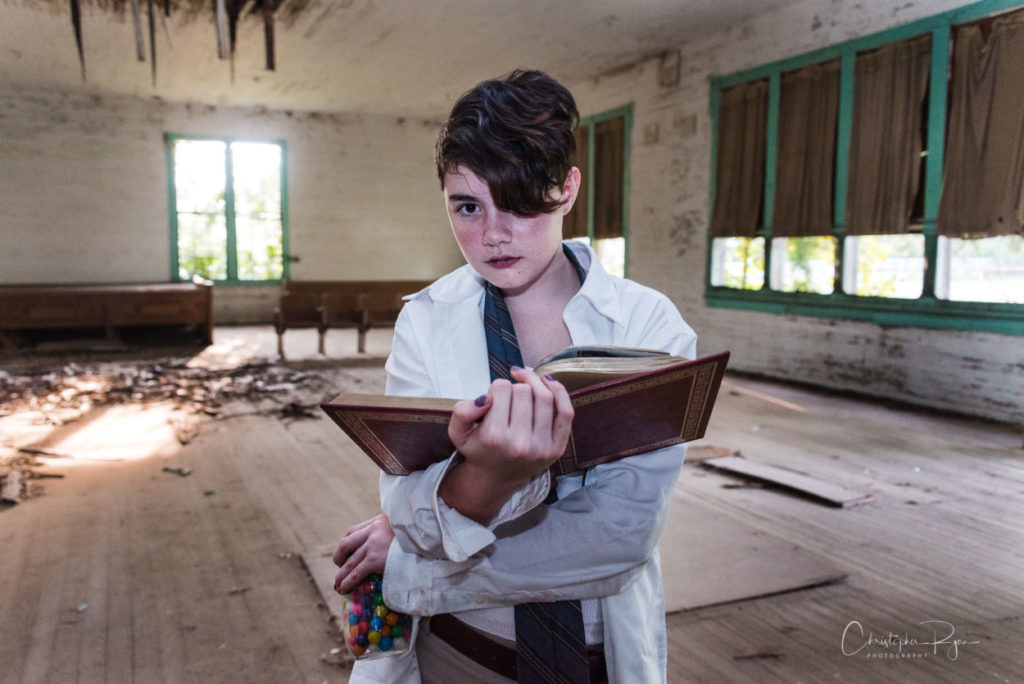 Everyone has dreams and desires. When I look into these eyes I see a beautiful child, not someone who should be forced to live up to other people’s ideals.

Out of respect for any type of transgender person (and there are many types), it is best to politely ask them directly about the pronoun that they want to be referred to by.  In this case Emma said that it was not too important to him at this time, but did prefer he or him.  So that’s what it will be.  His mother, Ashley, admitted that getting used to this will be one of the hardest parts for her.  Though this does not at all mean she is lacking in support or love, it is just a hard thing to change a very long time habit. 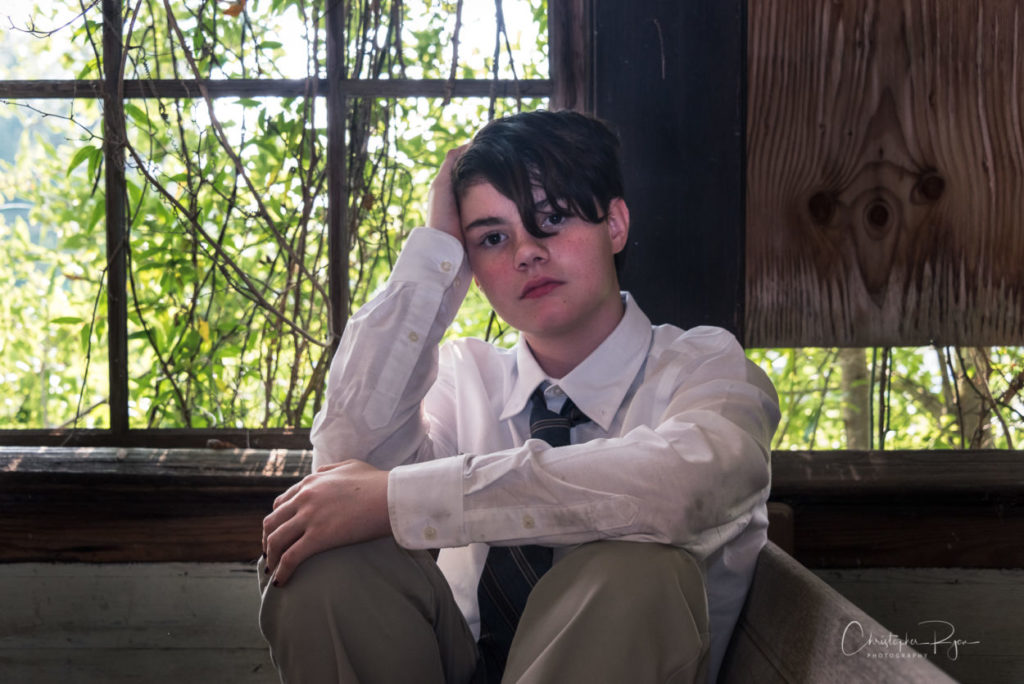 How can we know what is going on inside another person’s head and what they are going through?

Emma’s struggle lead to an attempt at ending his own precious life only a couple of months after this photo shoot.  Depression and suicide are tragic realities of gender dysphoric children as well as adults.  It is a heavy price for an individual to pay for other people’s ignorance and lack of empathy.  Fortunately his family is very supportive and they are starting to find the resources necessary to move forward. 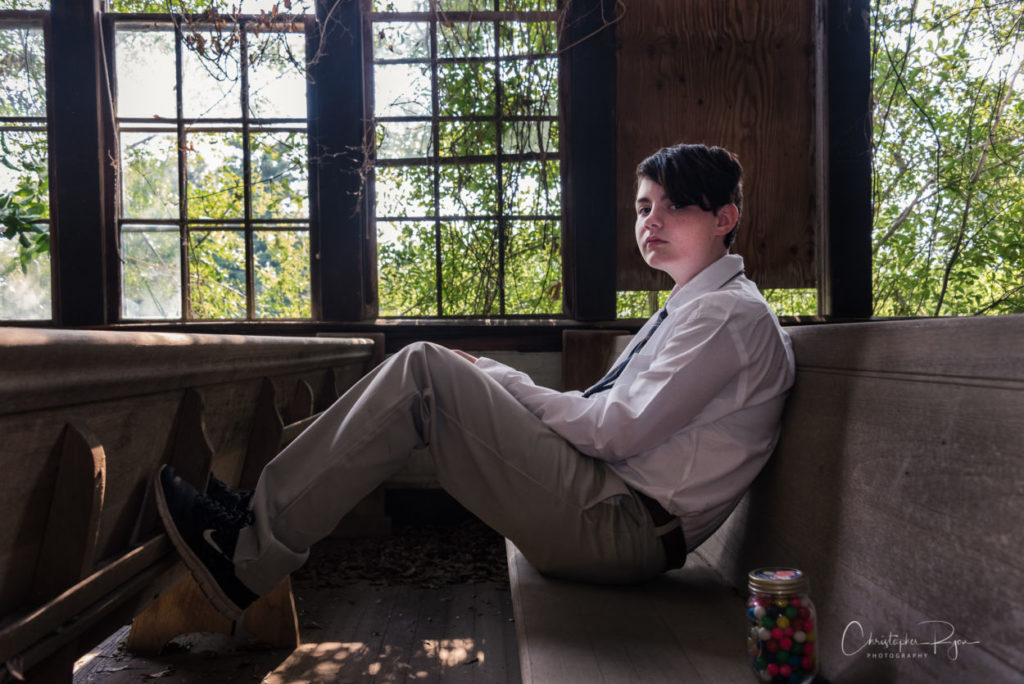 Our handsome school boy posing in the theater.

Emma fell into the role of the handsome school boy quite naturally. He appears comfortable, confident, and relaxed in these photos.  As the photographer, I feel quite honored to have been a part of this story and to be able to use my photography as a tool to help someone. 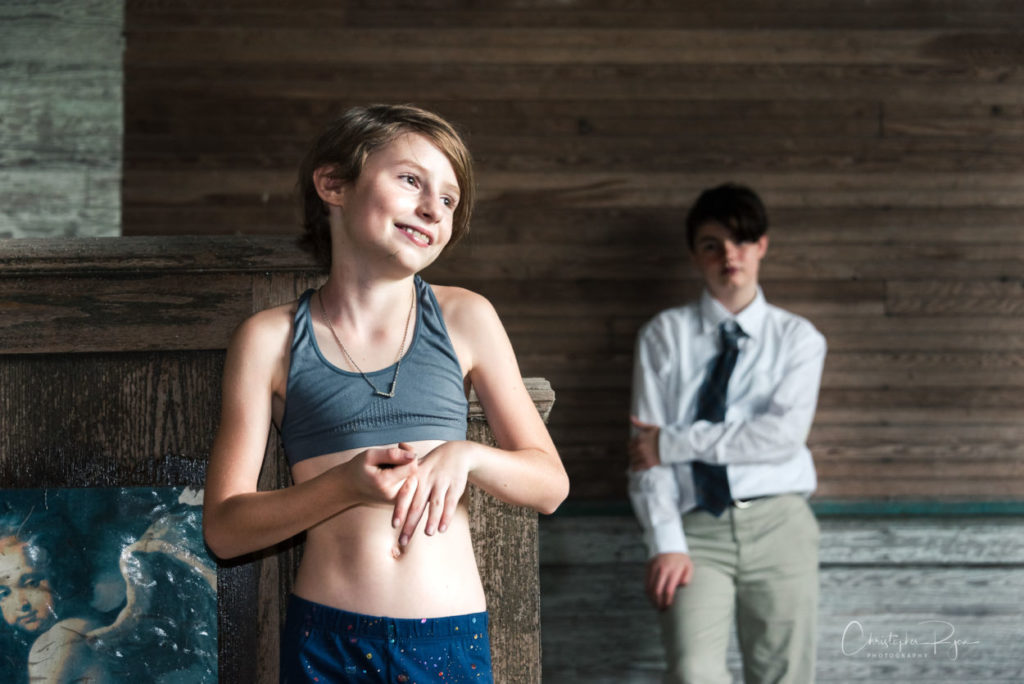 My favorite shot of the series! Madison is the student giving a presentation while Emma is the professor listening to the student.

Emma is blessed to have an adorable 9 year old sister, Madison who is very supportive.  Madison said that Emma being a boy or girl would not make a bit of difference to her.  She adores Emma, and was devastated over the suicide attempt.  The Human Rights Campaign has an excellent resource page regarding transgender children which repeatedly emphasizes the importance of love and acceptance within the family.  Emma is very fortunate in this regard with Ashley and Madison. 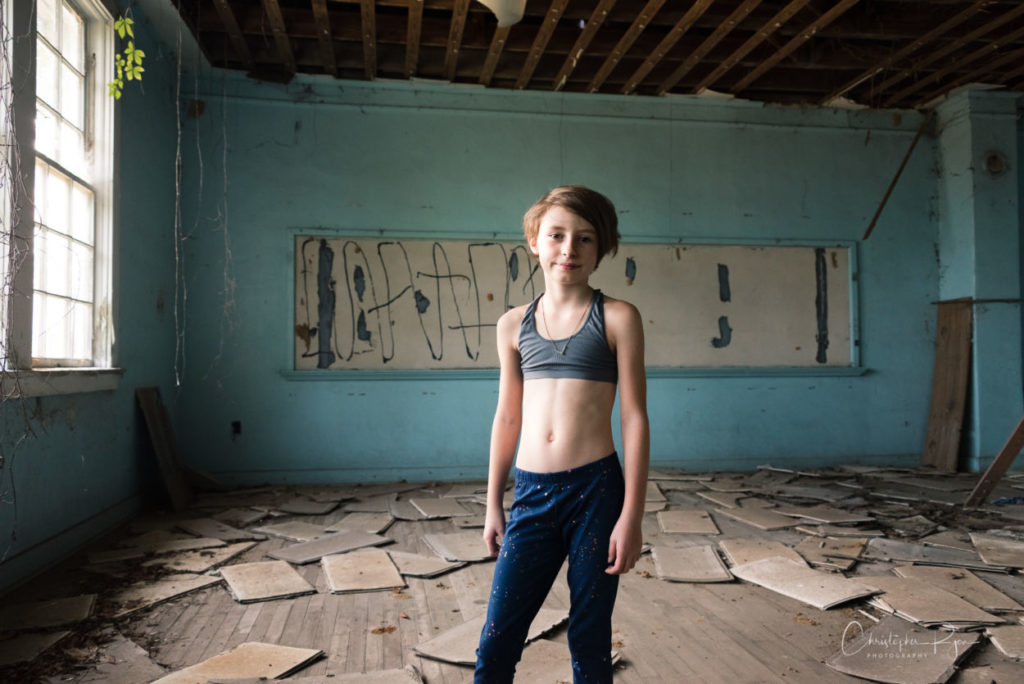 Madison posing in one of the classrooms of the abandoned school.

Though this project was intended as portrait therapy for gender dysphoria for Emma, I feel obliged to share these amazing photos of Madison as well.  My style is to shoot subjects as naturally as possible.  This includes minimal makeup and clothing.  Emma felt natural and comfortable in boy’s clothing and Madison felt natural and looks beautiful in her tiny sport top.  See more of this style in my other project Parent and Child Intimacy. 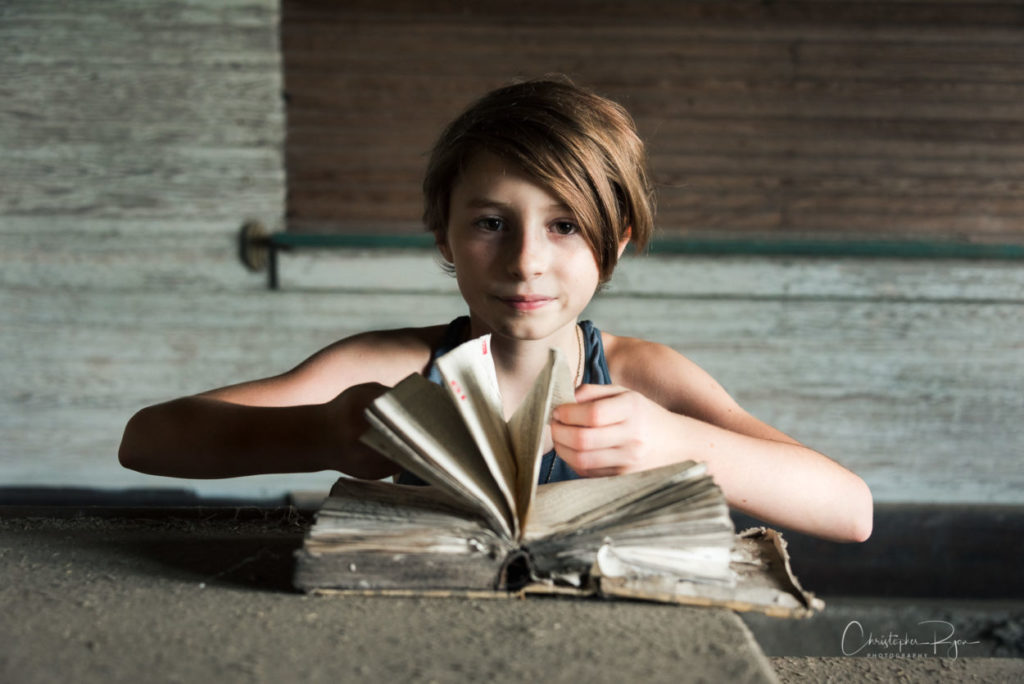 Madison looking through an old textbook at the lectern.

Please take some time and look through the Transgender Children and Youth page by the HRC just as Madison has taken time to read through an old book in the abandoned school. 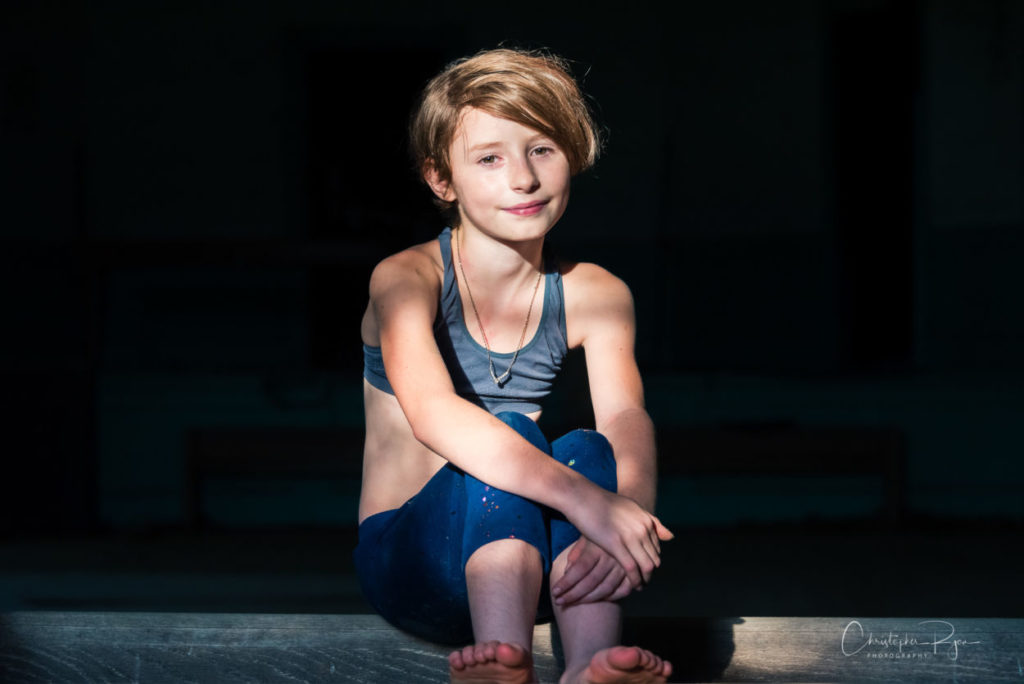 Madison perched on the old pews in the theater.

All images were shot on location at an abandoned school in Repton, Alabama.  I am especially grateful to Repton’s mayor Terri Carter for assistance in shooting here.  Mayor Carter occasionally offers tours of the historic Carter Hospital which itself fell into a state of abandonment until Terri took over some restoration and began offering tours.  The school itself is a large two level wooden structure with extensive structural damage. Maybe in the future the facility can be restored and become a community center. 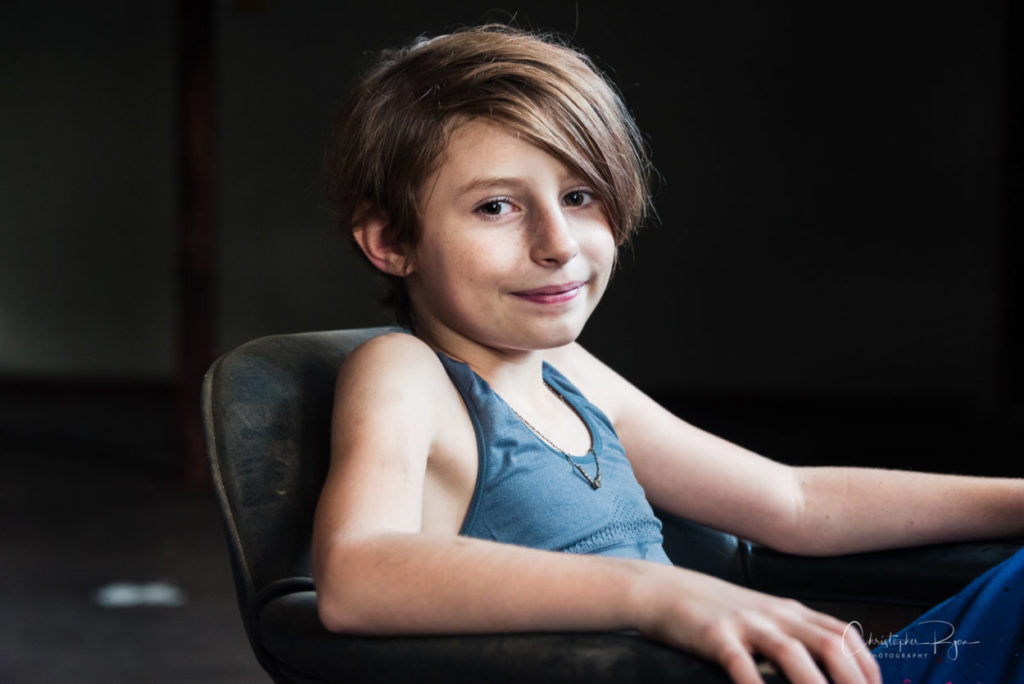 Madison posing in the teacher’s chair.

Further special thanks are in order to Ashley (Emma’s mom), all of their supportive friends, and to my beautiful grandmother, Grace Robinson for leading me to this beautiful location.

Be sure to check out another beautiful cousin Emilie in the Focus on Feet project.