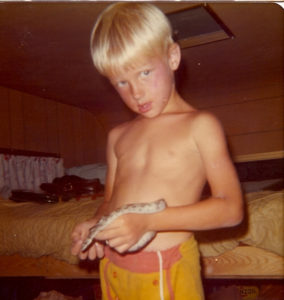 This was the design of my father, who I now refer to as my ex-father. For the remainder of this article he will be referred to simply as The Carny.

Feeding large pythons and boa-constrictors is no easy task. They consume a lot of food and it can get quite expensive. The Carny devised a lot of clever methods to obtain cheap or free food for the snakes. One was to go around to “cock fights” and collect the dead roosters when the fighting was over. The bloody mess was collected in large black Hefty sacks.

Another method was to go to Greyhound training tracks. The dogs are trained by turning loose wild jackrabbits, which the dogs love to chase down and kill. These rabbits are literally brought in by the trailer-load and at the end of a training session their bloody carcasses litter the training field. These were greedily scooped up by The Carny and placed into the aforementioned black Hefty bags.

When he was really desperate, The Carny would load the use up in the family van in search of “free kittens to good home” signs. My job was to pretend to love the kittens when in fact they have never appealed to me (repulse me in fact). On occasion entire litters were scored at one time, brought home, clubbed to death, and sent to the deep-freeze to for later entry into the fangs of the reptiles.

The smaller snakes were a bit less troublesome as we maintained multiple living colonies of mice and rats. One of my many jobs was to provide food, water, clean bedding, and poop removal service for these critters. Though the preferred method was to feed the rodents to the snakes live, often they would become overpopulated and I had to help with the slaughter. Unlike with the kittens, small rodents could be prepped for the freezer by grabbing them by the tail and slinging their heads onto an anvil as forcefully as possible without creating too much splatter. Quart size zip lock bags were substituted for the familiar black Hefty bags in this case.

Feeding the rats and mice became such a problem in itself that The Carny devised a scheme for collecting trash from behind the grocery stores. There was a schedule of when each store would dump its bread and other bakery items, which we used to schedule trips in the van. The Carny would dumpster dive and toss out anything that could be used as rat food and I would load it into the van.

The rats were housed in a cage at the far reaches of our yard so as the smell would only bother the neighbors, and not us (The Carny did not get along well with most of the neighbors). The stench of rat urine was overwhelming as was the smell of the rotting wood that supported the wire mesh of the cages. My brother and I (mostly me) were required to scoop up the droppings that fell through and spread them out in our garden. This was done in an effort to save on fertilizer rather than good will towards the environment.

We had a big swimming pool in the back yard growing up. The Carny loved to leave the pump turned off so that it would collect algae and trash so that I could be intimidated on weekends by being forced to clean it all up. On very few occasions, we would have friends from school over to swim with us, but it always turned out as a disaster when my father would yell and curse the other boys for ‘splashing water out of the pool.’ This was odd because all of our water was stolen as he had bypassed the meter system illegally at the street, he just loved to yell at people.

We had ducks for a short period of time until one day they flew out and landed in the pool tearing the liner apart. Enough of the water drained out that the pump/filter was unable to function. Eventually my father lied to the insurance company about what had happened and they paid to renovate the pool. In the meantime, however he decided to use the pool as housing for Alligator Snapping Turtles, three of them – HUGH (like 4 feet across).

One day The Carny thought it would be humorous to force me to wade out into the pool with a large Burmese Python wrapped around my shoulder, braving the snapping turtles (which could not be seen because the pool was so green with algae), so that he could take pictures of me. I think that is about the scariest thing that has ever happened to me in my entire life, and I will never EVER forget it. He got the pictures, and I guess he got his jollies out of the whole thing, at my expense.

It wasn’t all bad. From time to time The Carny would be out of town for work, snake trading, and picking up runaway children, etc… When he was gone, my Mom would try to compensate by taking my brother and I to the beach, the park, mall, etc. All of the things The Carny would not allow. “We had a pool in the yard, why in the hell would we go to the beach” he would say.

Did I mention our vacations? We were a nudist family, meaning we liked to run around naked. I still do actually. This was one of the things that I didn’t mind so much, we got to go to some really neat places and were able to do normal kid things like swimming, boating, etc. The people were kind of odd though, but I didn’t pay much attention to them.