Where is the abandoned amusement park in Yangon, Myanmar? 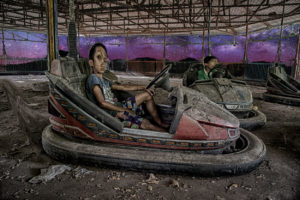 There exists in Yangon (the former capital), a very interesting abandoned amusement park.  It is a good location for someone just getting started in the hobby of urbex (urban exploration) because it is relatively safe and it is very easy to find.  The first step is to locate Yangon Zoological Gardens on a Google map.  You will notice that the southwestern end of the zoo comes to a sort of point.  At that point is an exit from the zoo.  Directly to the east of this exit is a parking lot used primarily by taxi drivers.  At the back part of this parking lot, there is usually a pack of wild dogs and behind these dogs there is a fence.  There is usually a hole in this fence so it is easy to get through.

If you cannot find the hole in the fence, cannot climb over the fence, are afraid of the dogs, or get chased out of the parking lot by the attendant then there is one other option.  You can go a little further to the east and there are several ramshackle restaurants.  My research indicates that some of these restaurants are holdovers from when the amusement park was still open and the laid-off employees are now squatters and live in these places.  You can ask them to let you through the back door  On a couple of occasions I did the reverse of this and they did not seem to bothered, so I am sure some would let people through.  In any event try to make a mental note of where you entered so you can find your way back out!

A brief history of the abandoned amusement park in Yangon 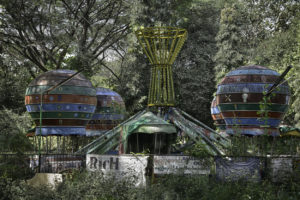 The amusement park was opened in 1997 by the Burmese dictatorship.  It was probably intended as a distraction for the evil things they military were up to in other parts of the country.  The opening ceremony was attended by several Burmese big-wigs including General Khin Nyunt, who was then Secretary-1 of the State Law and Order Restoration Council.  The military was proud of the park and hailed it as a “world-class” amusement park with “modern” attractions.

Several articles relating to the amusement park claim uncertainty as to what caused the park to close and none cite the specific date or year.  However, an article by Joshua Carroll in Frontier Myanmar state that the founding partnership (Doh Pyi Thar Enterprises Ltd.) was dissolved sometime in 2016 and further information is difficult to obtain.

Warning about visiting the abandoned park

The park seems relatively safe.  Almost everything is made of steel, so there is no worry of rotting floors to fall through.  There is also not too much broken glass or sharp rusty objects to poke you in the eyeball.  However, there are a few things to watch out for. 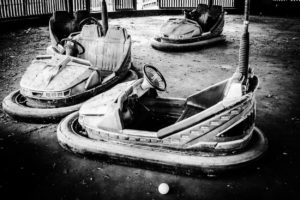 There are two bumper car rides at the park.

DOGS!  There are large packs of stray dogs.  They are actually everywhere in Yangon, so you should not be particularly worried about these.  My preferred approach is to keep walking wherever you are headed and let them yield to you.  In other words, do not look scared as this may make them feel more powerful.

MOSQUITOS!  Another thing to be very concerned with is mosquitoes.  They come out in force when the sun starts going down.  Come earlier in the day or dress & use bug repellant accordingly. I modeled shirtless for a couple of artists one evening and though the mosquitoes did not bother me too much, both of the artists were viciously attacked.

SNAKES!  I did not see any snakes myself but have read on other websites that this is a 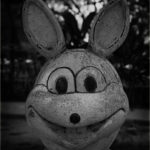 concern.  I always try to walk through grassy areas or places with underbrush with a heavy foot when exploring abandoned places to give snakes (and any other animals) ample warning and opportunity to clear out of my way.

SUN!  The sun can be quite hot at this location, especially on some of the rides with lots of steel plate conducting heat.  Bring plenty of water as you will probably want to spend about two hours here if you are taking photos. 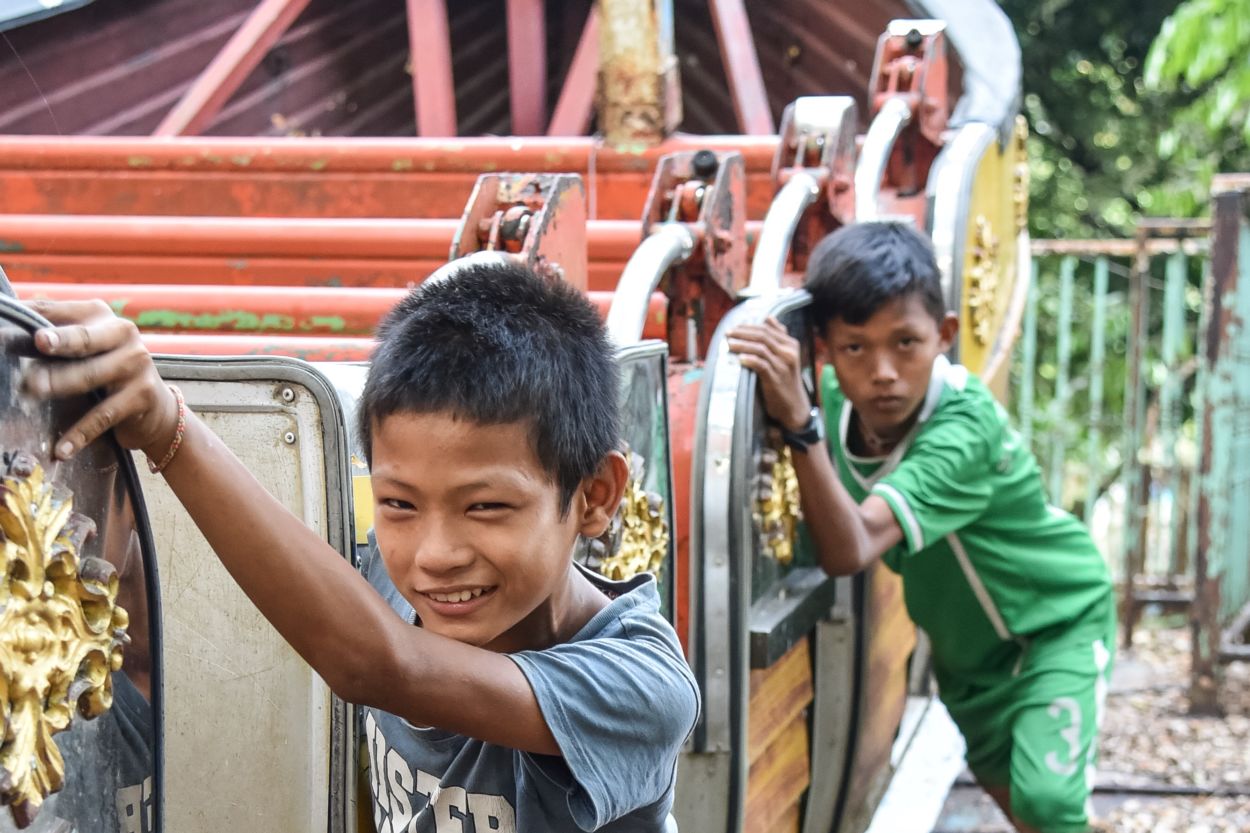 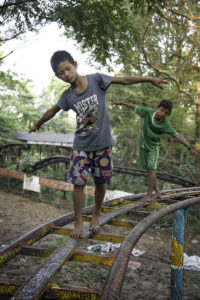 I have long had a love of photographing abandoned places as well as children, especially boys.  I love their playfulness & innocence.  In 2016 I decided to work to combine these two subjects together.  As you can imagine it is a very difficult task.  Asking a child’s parent if you can take their kid into an abandoned building to take their photo sounds downright creepy!  However, I have persisted and this was my second place to shoot with live models.  There is an interesting story behind the model scouting process.  This project has since been updated and you can find many more shoots on my Youth and Urban Decay pages.

My faithful driver/translator and I searched for models for several hours.  We tried several tactics, all of which involved starting off with adults to locate kids.  He did all of the talking as I do not speak any Burmese and there is a customary ritual of sitting down at a table to make any such inquiries.  Even if the answer was clearly no, it was necessary to continue sitting for five more minutes before extracting ourselves from whatever establishment.

As the end of the day drew near we had to try more desperate measures, so we drove to the absolute poorest side of town, which was located west of the side about 12 kilometers from downtown and on the opposite side of the Yangon River.  It didn’t take long to find two adorable kids.  They happened to have a young novice 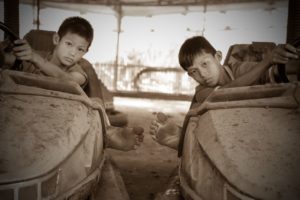 monk visiting in their shack which was also rather interesting.  After a long talk with the parents, it was decided we could take the two boys into the city.  They were to be accompanied by a neighbor and this man had to bring along his daughter as there was no one left to watch her.

What is so interesting to me about this is that none of these people had EVER crossed the river into the city of Yangon.  This includes the adult.  The children had never been inside of a car.  In fact, the girl quickly became car sick and barfed into her father’s hands.  It was really quite interesting to me.  They only lived about 2 kilometers from this bridge and yet had never crossed it.

The boys were understandably quite nervous at first but warmed up fairly quickly with some coaching from the driver.  The driver was awesome and really got into helping me with poses & directing once we got started. 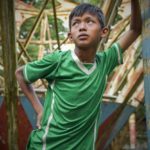 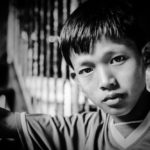 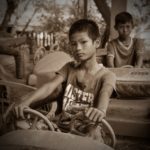 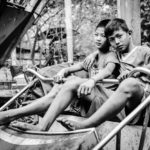 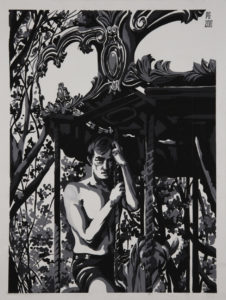 In all, I made three trips to the abandoned amusement park in Yangon.  The first was the discovery trip.  Then I returned a few days later to shoot the boys in the park.  Finally, I came back to model for two lovely young ladies I had met modeling earlier in the week at an art gallery.

While they both produced beautiful art, I particularly love this one on the left.  As you can see it features me riding the merry go round shirtless.