The Plan for Hiking in Sapa Vietnam

I had a plan for Hiking in Sapa Vietnam….. Well, kind of did anyway.. Things went a little bit wrong, but this proved to be on of the greatest experiences of my life! Let me tell you all about it. The plan was that I would meet Long, a young man I met via Couchsurfing at the Red Bridge in Hanoi and we would take a bus to Sapa, then go up to his friend’s house in the mountains and stay overnight. It all sounded awesome. Due to language barrier issues, a lot of things didn’t get conveyed to me as well as they should have. Questions I would have asked out of instinct were left rattling around in my brain. We were not to have enough time to do any shopping between my flight arrival and the bus departure, so my host said just leave everything up to him and we would be fine.

Several new pieces of information came out as we began the trip. First of all, we were traveling via sleeping bus which proved to be extremely uncomfortable. I had envisioned a traditional over the road type of bus with plenty of leg room and comfortable seats. This was not to be the case. Secondly, we were to travel via rented motorbike from Sapa to the trail-head. I have had little motorcycle riding experience in my life, but was still up for the challenge. I did need some help finding a bike because obviously I had no idea what I was actually looking for but once we had it all sorted, I was good to go.

We were late getting to the bus, but luckily the bus was late leaving anyway. The company is called Queen Cafe Open Bus and it is a really bad experience. With hiking holidays, it usually is easier if you hire or take a car or campervan. It will make your life so much easier and means you can do things at your own pace. Most countries are pretty easy to drive in and you can usually find information online to help, like this guide to driving in iceland (another popular hiking destination) for example. However, that is not the case in Vietnam and so I was limited slightly, which is why I ended up choosing the bus. Looking back, I can plainly see they have horrible reviews and would not have selected this on my own. The staff on board was very rude and insisted on putting me in the very last seat of the bus. Next time I will pull a Rosa Parks and create a big scene. There is no place to put your belongings, and no room to stretch out and once you are in, you are in! You can’t get up to walk around. Picture yourself inside the cowling of a riding lawnmower and you will get the idea. On top of all of that, the guy next to me constantly fidgeted with the windows, shades, his cell phone, etc. We were squeezed right up against one another. It was raining when we arrived and you had to stand in the rain while a long line of people took time to remove their shoes before being allowed on the bus.

We left at around 11 PM and arrived in the wee hours of the morning. The shitty bus company does not turn on any lights, making it very difficult to get your bearings or find your belongings. I left something rather important and we had to march back 30 minutes later and wake up the driver to let me back in. It was a mess.

So, after arrival I was informed for the first time that we would need to get motorbikes. Subsequently I was informed that it would be an hour or longer motorbike ride to the trailhead. Following that we got lost repeatedly. If you want to see something really funny, check out the video at the 1:00 minute mark at how people attempted to give us directions. Despite all of the problems and aggravation, this ride turned out to be an incredibly exhilarating experience, an almost euphoric experience riding through extremely remote farming villages passing a variety of livestock freely roaming the same path with us. The road was very narrow, so a motorbike was the only real way. Although I had not been on a motorbike for a long time, I could not wait to tell my best friend all about this part of the trip. He is a keen biker, and has just bought a brand new motorbike similar to the one I got to ride. Additionally, he likes to buy motorcycles to tune them up and then sells them online. If you are looking to sell a motorcycle online, he has told me that this company really do buy any bike. Above all, I must admit that I feel tempted to purchase a bike of my own upon my return. 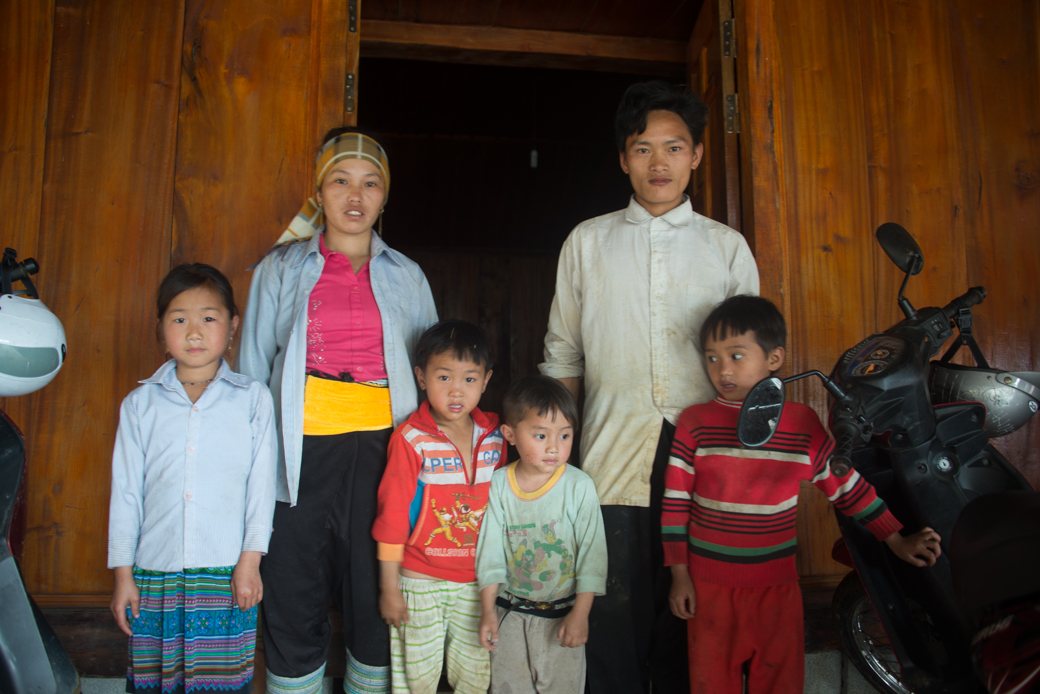 After riding for about two hours and riding the motorbike up an incredibly steep, muddy, rocky path, I just couldn’t get it to go any further. The gentleman pictured above was literally carrying a machete in his mouth as he took the motorbike from me and fearlessly rode it another 50 meters or so and parked it at his home. This was to be our guide. Villagers have a natural fear of foreigners, but I managed to get them to somewhat pose for a photo. I don’t think I’ll be talking to these guys on FaceBook! 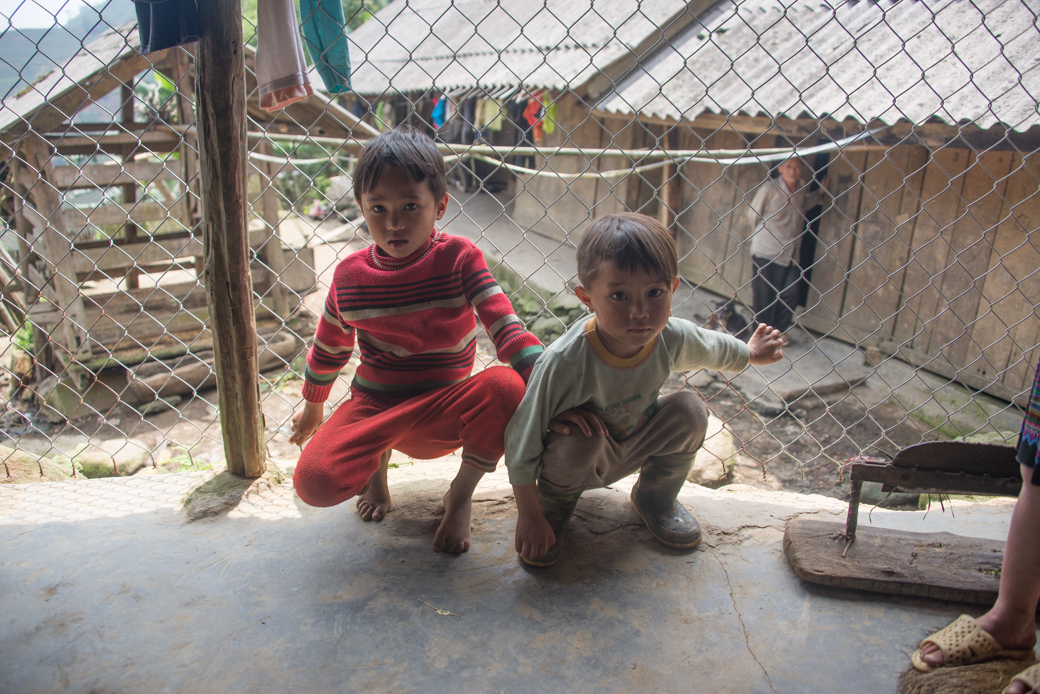 They never really did warm up to me, but this photo gives a true feeling of the reaction made by 99% of all people I encountered 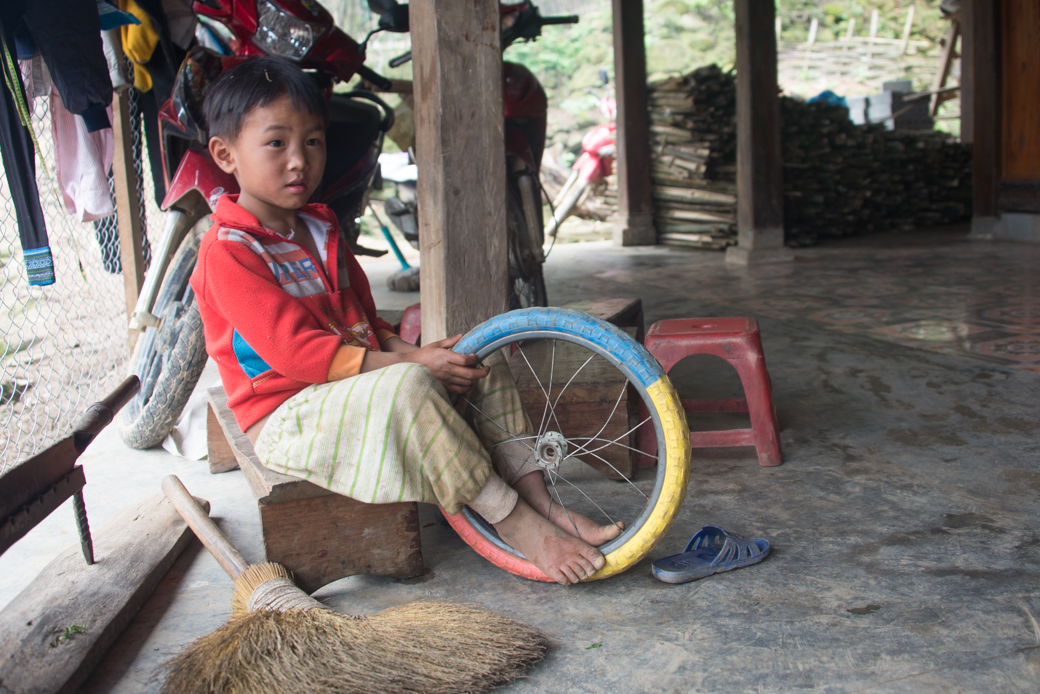 No doubt the dirt bike didn’t last long in this terrain but is great practice for when he gets a real motorbike. 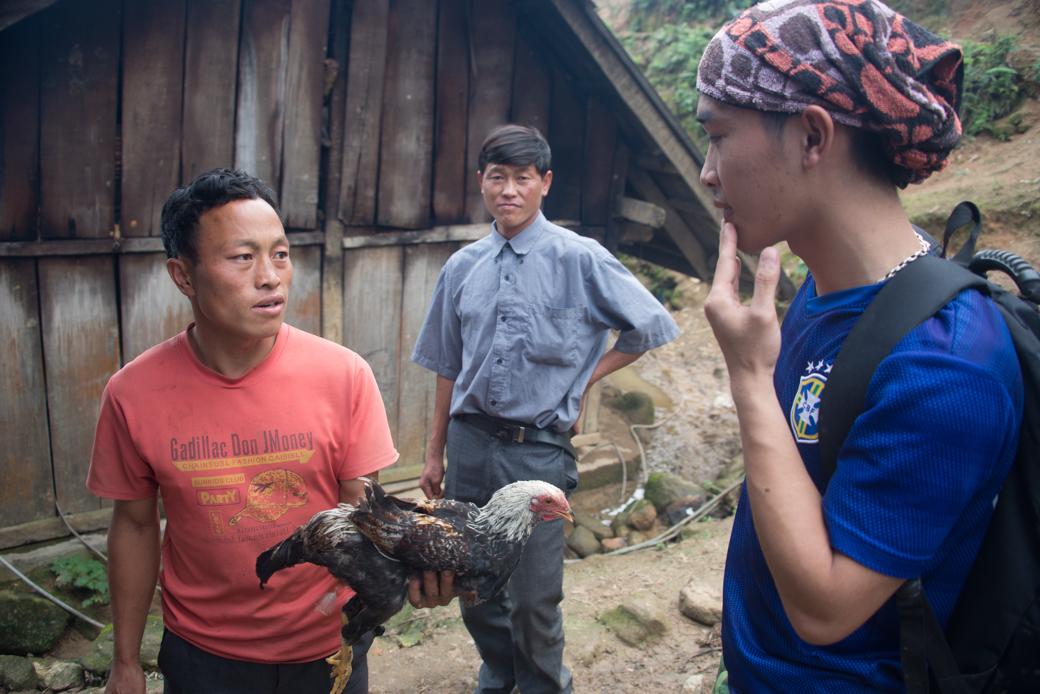 A chicken was carefully selected for us to eat later that night. His feet were tied together and carried unceremoniously upside down for the last few hours of his life. 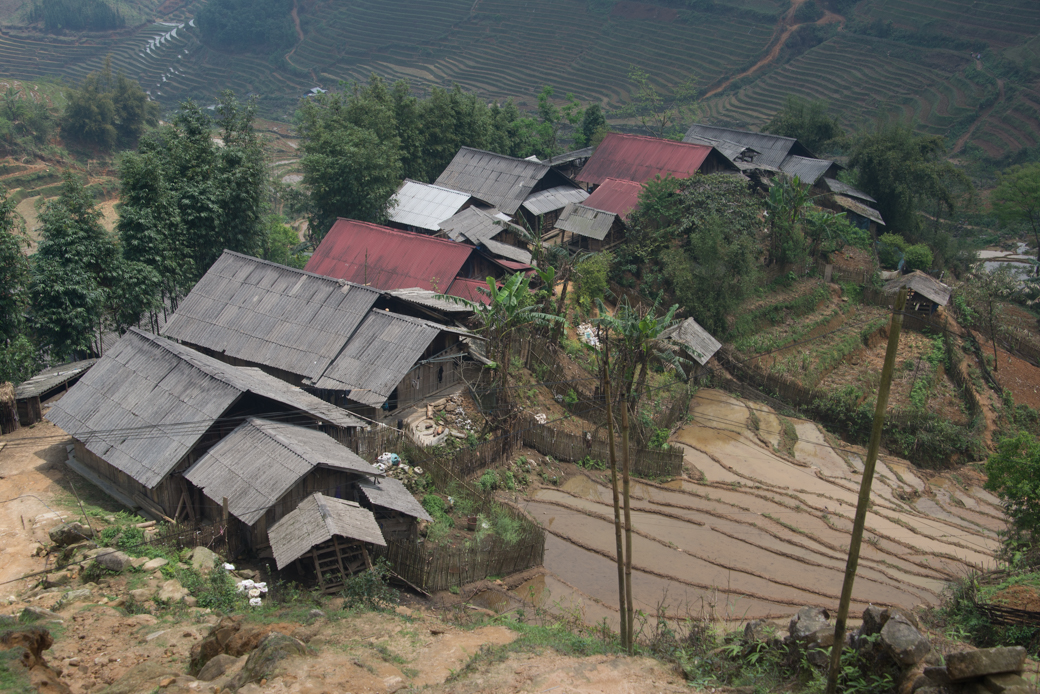 This was to be one of many views of our village I would see on this trip. Each one successively higher than the last. This is very rural farming land where each small village are some sort of family members. They are primarily engaged in rice farming on the magnificent tiered mud-walled system seen here. It is truly a beautiful awe-inspiring sight. I’ve never before experienced anything quite so remote. 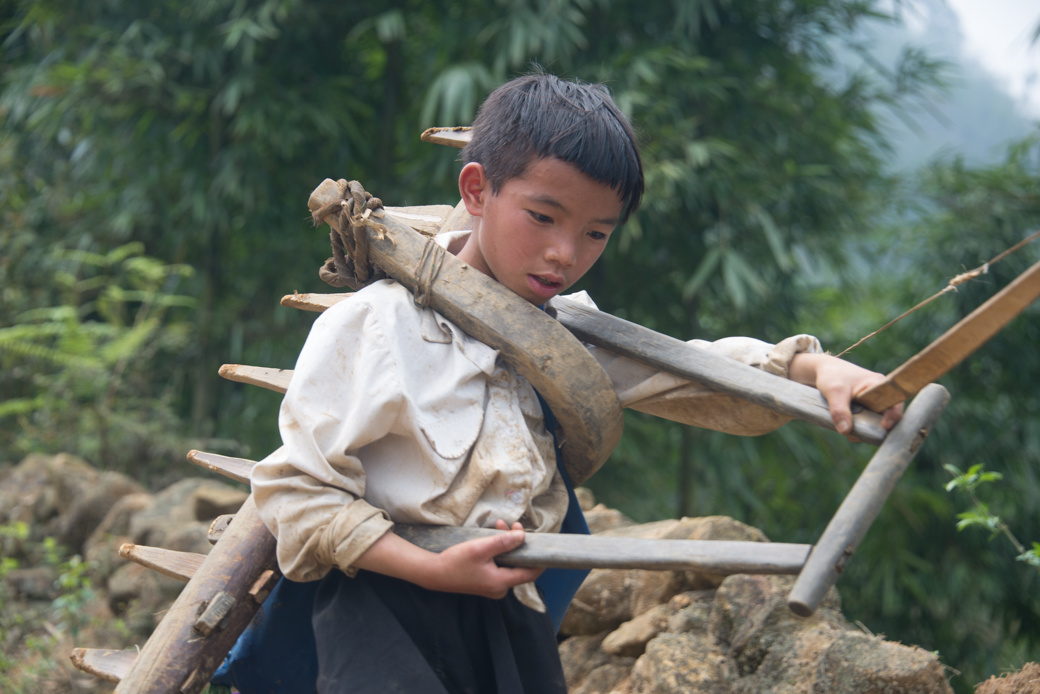 Anyone old enough to walk had a job to do. None of them looked really happy about it, but neither did they seem to complain. I wish I could have taken more time to inquire about certain things & learn about the culture, but my host was in a hurry to scale the mountain and was way ahead of me 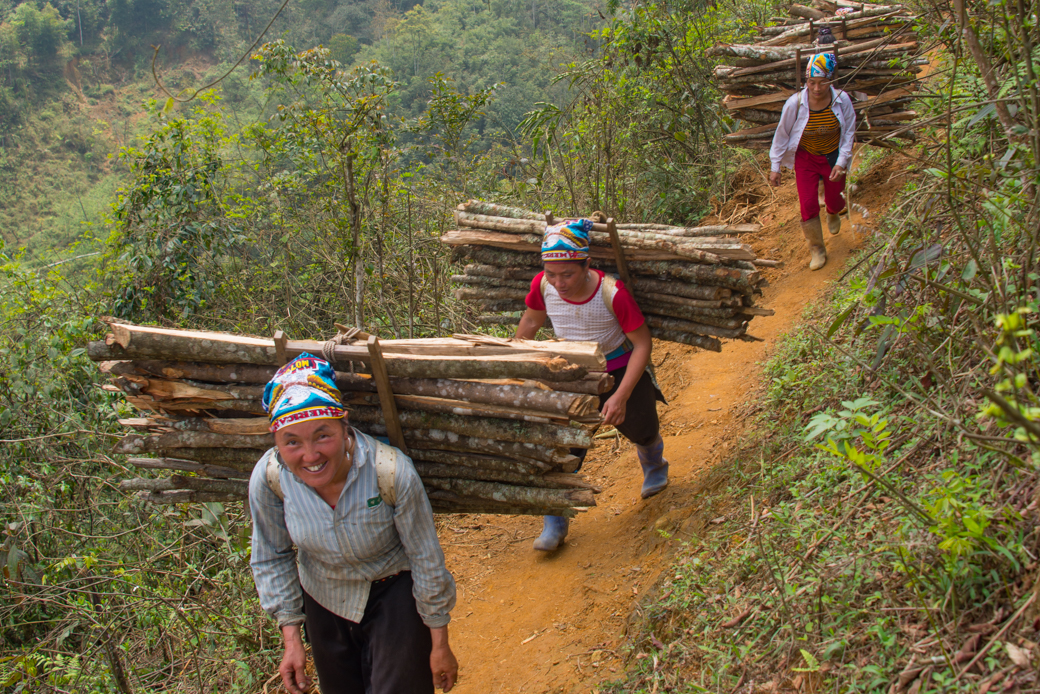 There was an endless succession of women chopping or carrying wood. The loads appeared to be fairly heavy and were tied to a crude frame. A few of them caught my gaze and smiled for the camera, but most looked away hoping to avoid me completely. I did my best to step out of their way, but my own pack (not loaded appropriately for trekking) was beginning to weigh me down and we had only just begun.

The Last Bottle of Water! 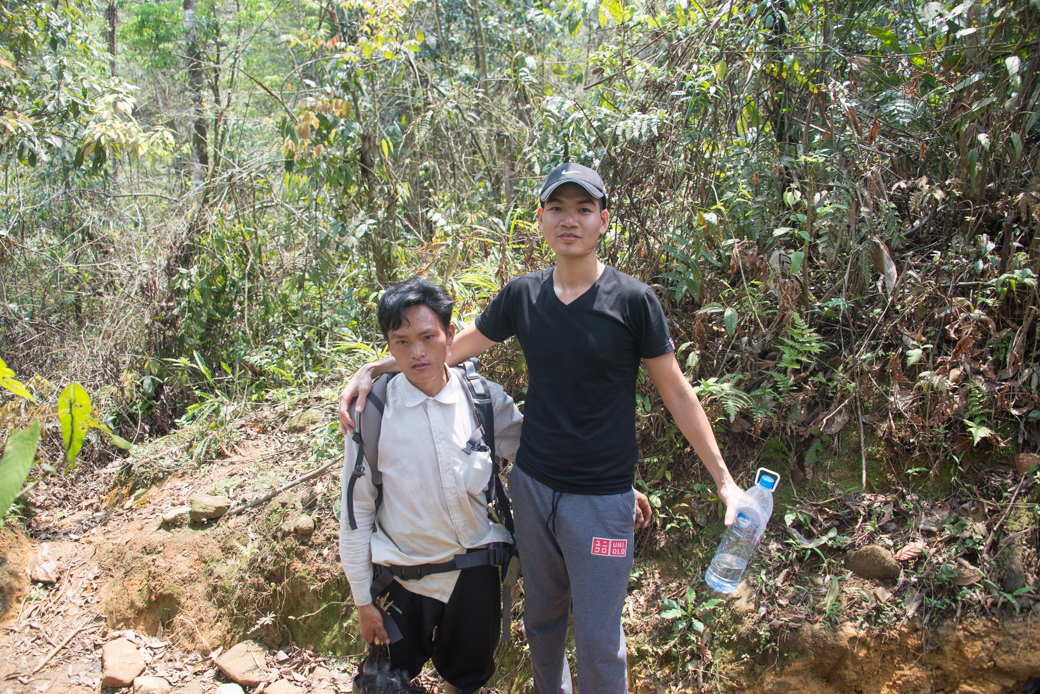 My host is shown here holding what turned out to be the only bottle of water for the group of four of us. This was revealed to me about an hour into a very steep, very hot climb that was to take about 4 hours only to reach the overnight mid-point. I also came to the sad realization that this was not to be a “friend’s house in the mountains,” but rather a primitive community hut of some sort. We also had consumed the last of the snacks and would not eat again until the poor chicken was slaughtered.

Common sense overtook my sense of adventure and I informed the group that it would be hazardous to my health to continue the journey. I’ll admit I was very nervous about going back alone but no one offered to go back with me so I took my chances. I knew it would be very awkward recovering the motorbike in the strange village and finding my way back to Sapa, but it was the only sane option. 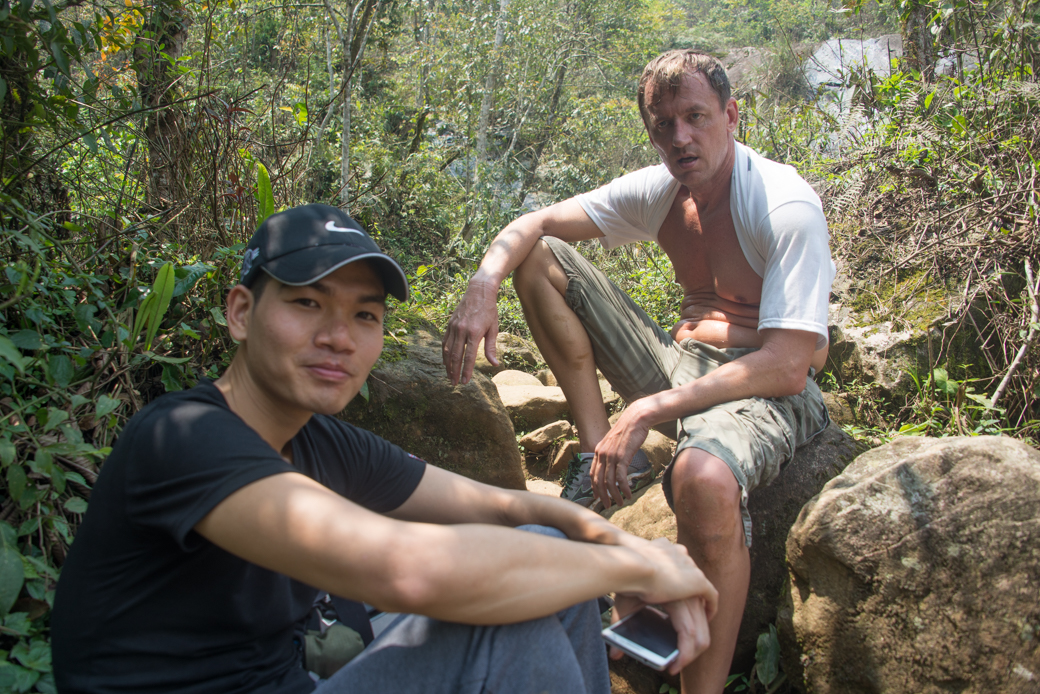 This is my host, Long, and myself just before I turned back. Look how my face is sunken in. I was exhausted.

Help and Hindrances along the Way

What turned what could have been a total medical disaster into a treasured memory was the people I met along the way back down. I want to emphasize that this was a very harsh, hot, and humid environment. We were well above the elevation of the villages, so there was no shade or anyone to save me if I had a heat stroke or other form of exhaustion. However, there were some small respites of salvation along the way. 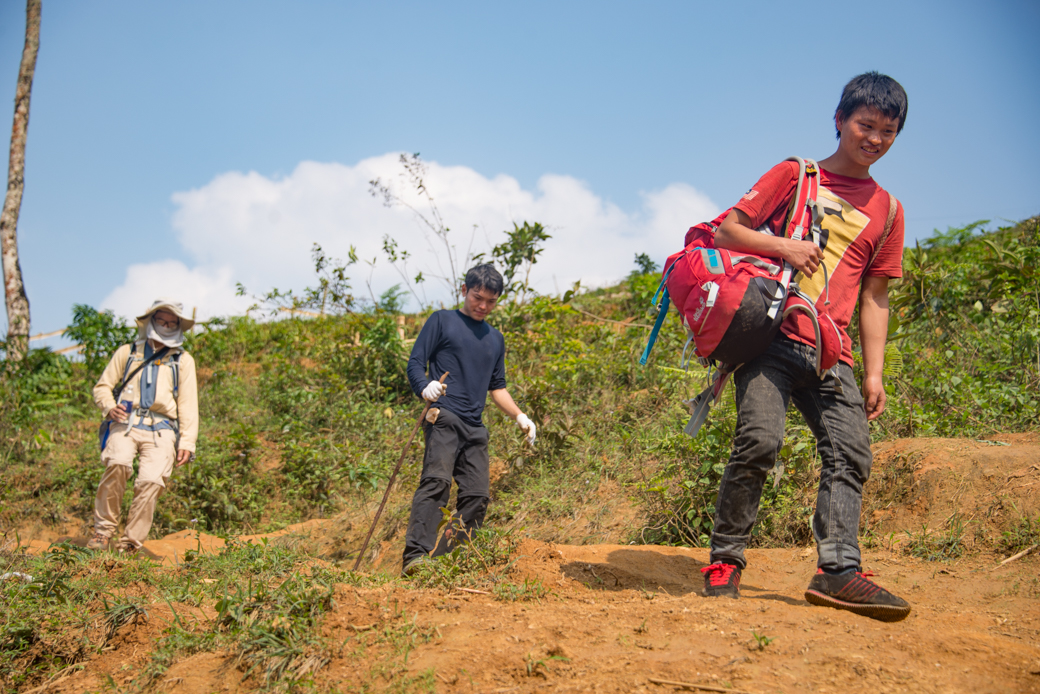 The saviors! This group of hikers was nominated to escort me down. The first one (cute boy in red shirt) was the local village guide taken on by the second two young men from Hanoi. Apparently the way hiking trips are done is people fly into Sapa, rent a motorbike, ride as far as they can, then secure the bike with a farming family who will assign their son, brother, or father as your guide the rest of the way up. Anyway, the guy in the middle was also hurt. He had fallen down and messed his leg up really badly. This was lucky for me because they did not complain about my slow pace. 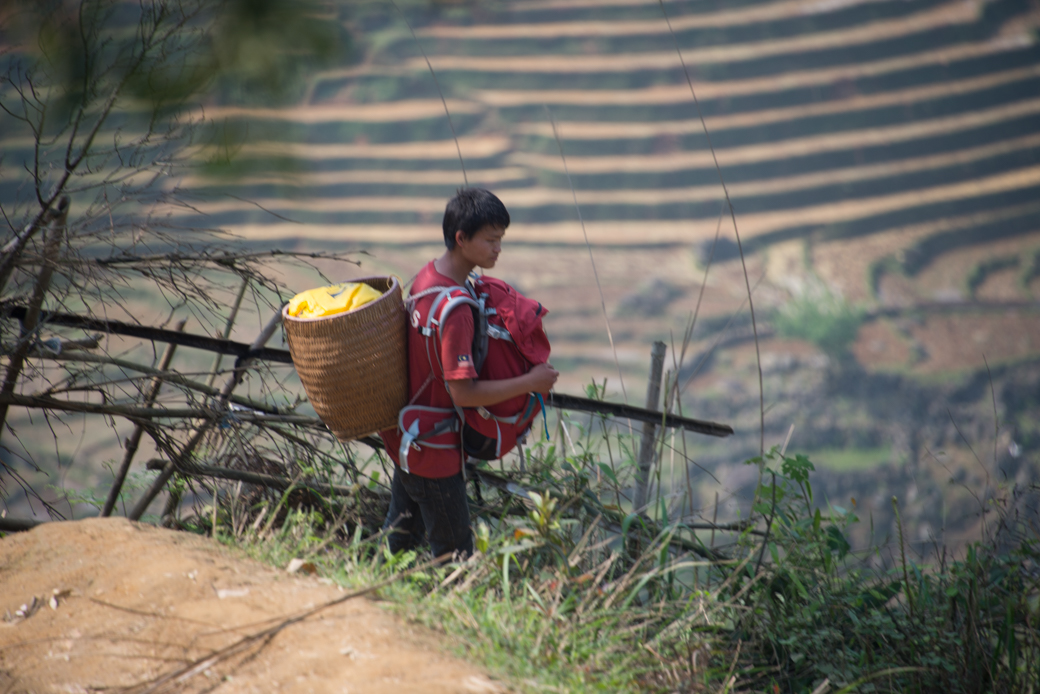 The new guide with his crude basket-pack on his back and injured Hanoi backpacker’s pack on his front overlooking rice fields. 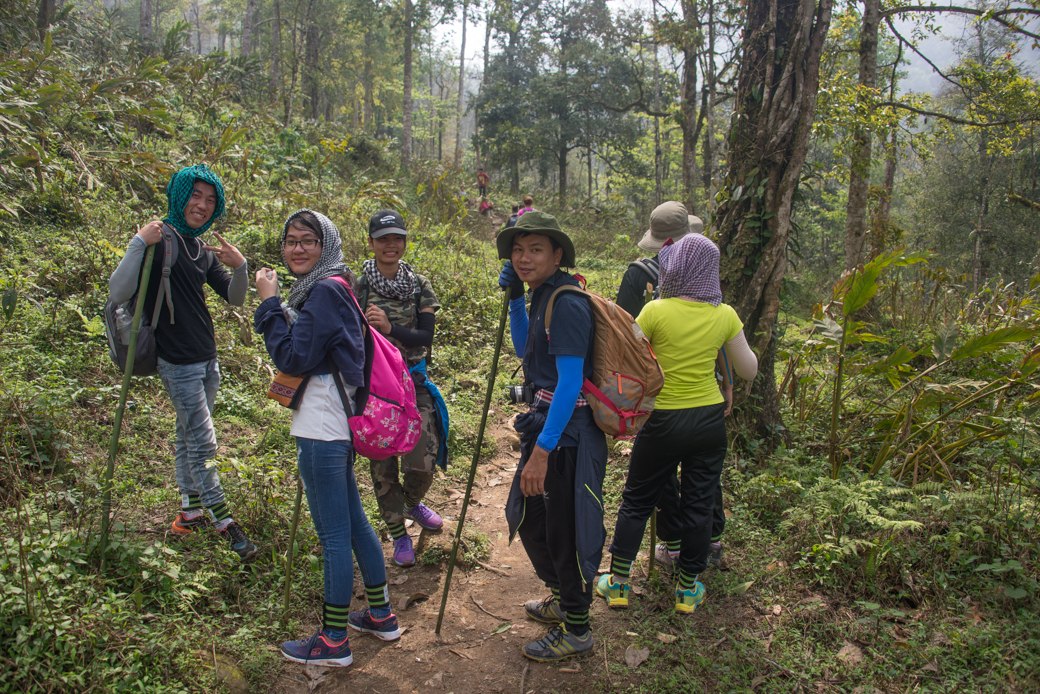 At some point I was separated from my rescuers temporarily and met up with this group from Hanoi. I conveyed my story and the young man in blue shirt sleeves gave me half a bottle of water. We took photos of each other and they continued on their way up.

The Most Beautiful View in the World 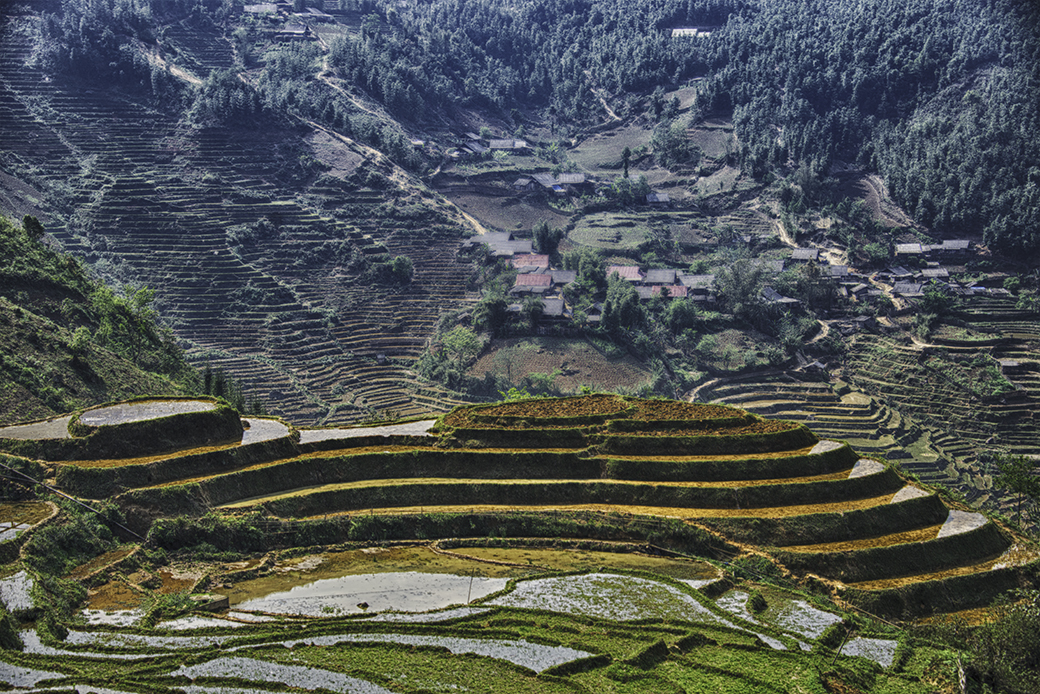 Eventually we came to a village. Sadly, it wasn’t my people’s village! At some point there was a fork in the path and I missed my turn. This was not a bad thing because I captured the photo above, which was an incredible site to see in person. Not only because of the beauty of it, but it also signified returning to “civilization.”

After this I left my new friends and found my way alone to the right village. I recovered the motorbike and after some other minor difficulties found my way back to town. In my exhausted state I forgot the helmet, and didn’t realize it until 30 minutes later at the base of the mountains. It had to be sacrificed and I took my chances without it.

Eventually I found my way back to Sapa, located a hotel room and laid down on a very hard bed and slept like a baby.

This was one of the last few days of my 7 day adventure through southern, central, and northern Vietnam. It was an amazing journey of self-discovery and was a feast for the eyes.