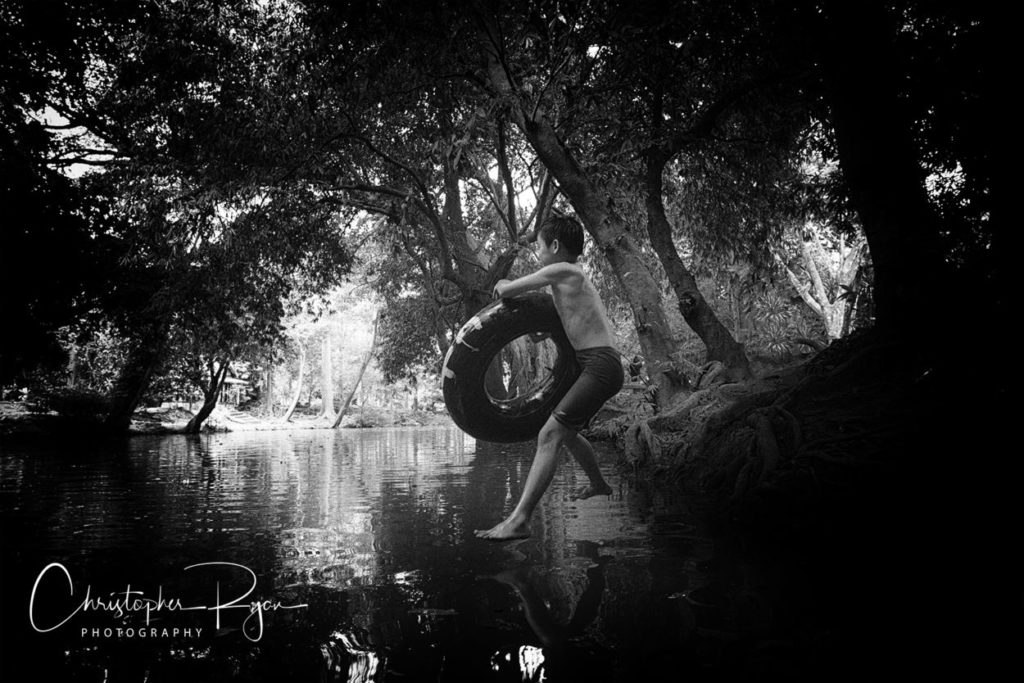 This was my second photo session with Pin, a nine year old boy living near Pakchong, Thailand.  Pin is a great kid to work with as he is very expressive and has a great deal of patience with trying different poses over and over again until we achieve the perfect result.  As an added bonus, he speaks perfect English.  The concept is simply “boy on inner tube.”

These photos were all shot at Muak Lek Waterfall.  Surprisingly, there is no admission fee though there is a minor fee for parking.  My main concept was shooting Pin from directly above while he is  floating in a black inner tube and peering up into the lens.  Upon arrival I hired two maintenance workers to gather a variety of leaves to spread around him on the water.  However, this proved to be too much of a challenge as the floated away too quickly.

All of these images were shot with a Nikon D750 with 24-70mm Nikkor f/2.8 lens.  All initial processing done in Adobe Lightroom.  The main image (above) was edited in Photoshop to remove four tourists from the background and also has Nik Collection Silver Effex Pro 2 filter applied.

Full Color Images in the Water 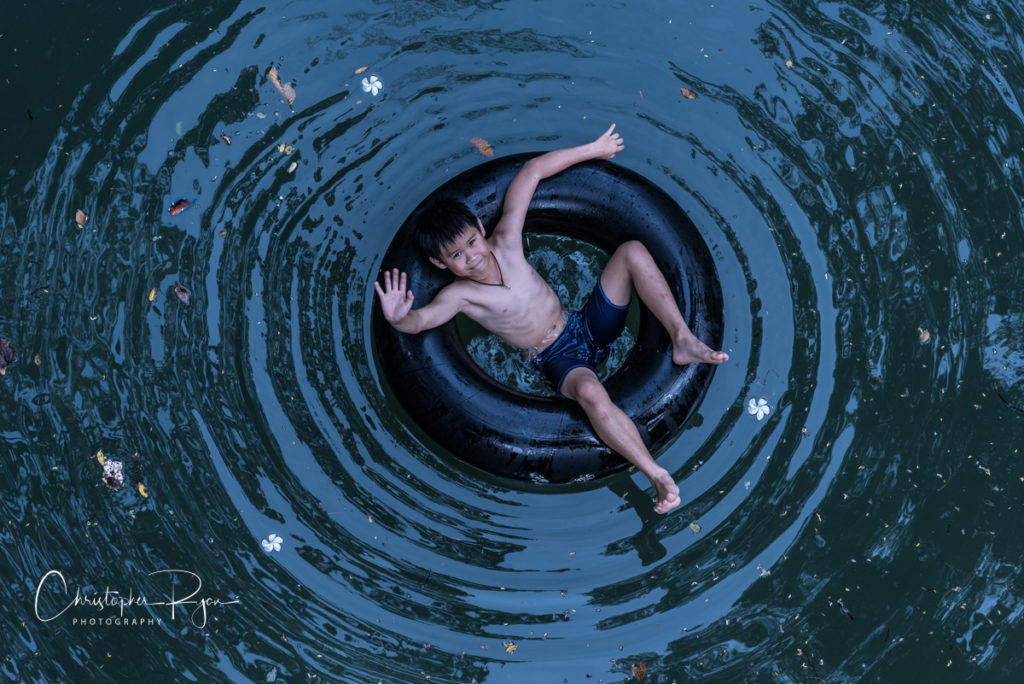 This is my favorite concept image.  I am very pleased as this turned out exactly as I had envisioned.  It took longer than expected to get Pin positioned just right.  His uncle was under the pedestrian bridge on another inner tube and had to retrieve Pin multiple times as he floated out of the way too quickly at times to get the lighting and poses just right.  By the time we had this image captured, all of the lovely leaves we collected had floated away.  However, a flower appeared which I reproduced in photoshop and it seems to work out nicer than the leaves.

This image was processed in LightRoom by adding extra clarity to the water to enhance the appearance of the ripples and cool the color of the water a bit.  Photoshop was used to reproduce the flowers. 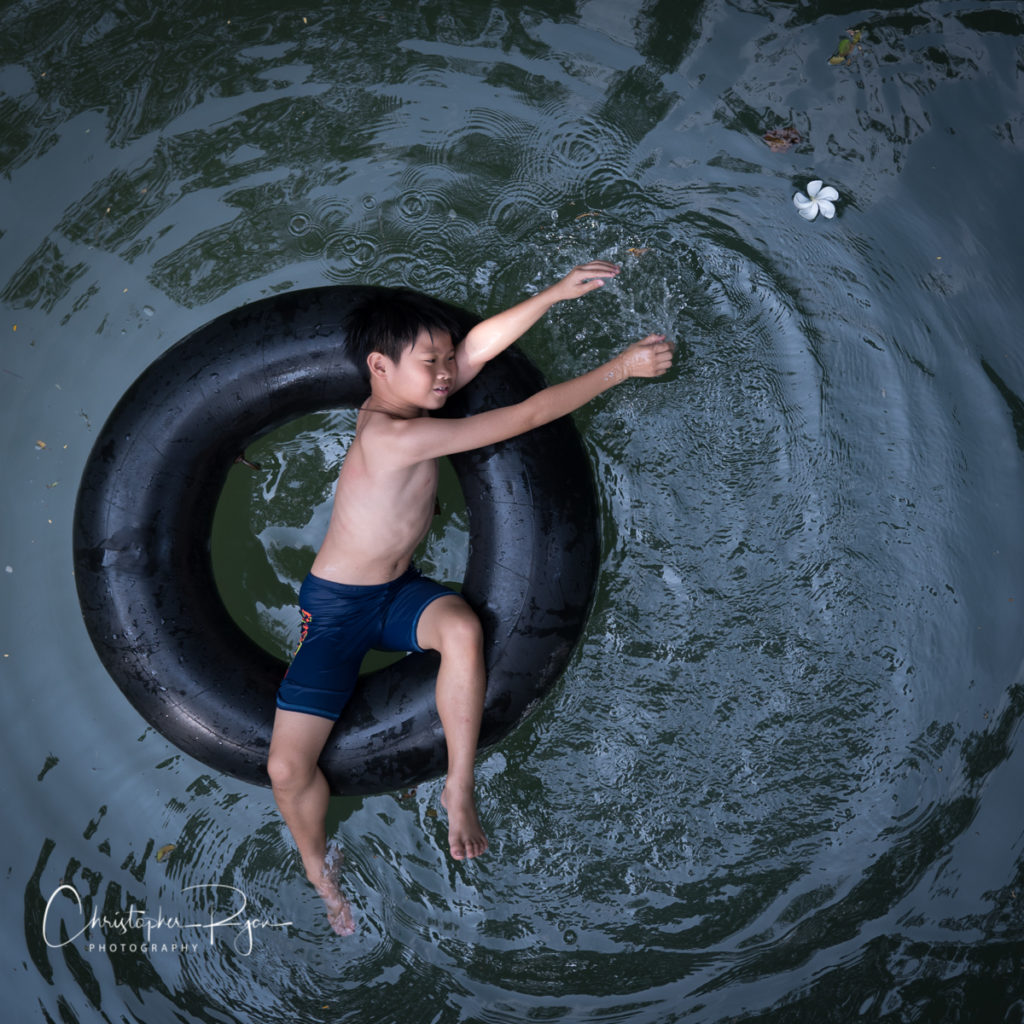 The rotation introduced in this image is designed to give the appearance that Pin is climbing uphill to reach the flower.  It was not quite in the perfect position and was moved using Photoshop.  After rotation of the image, the transform tool was used to reduce the awkwardness introduce by the rotation.

This image shows the water at its in-camera temperature. 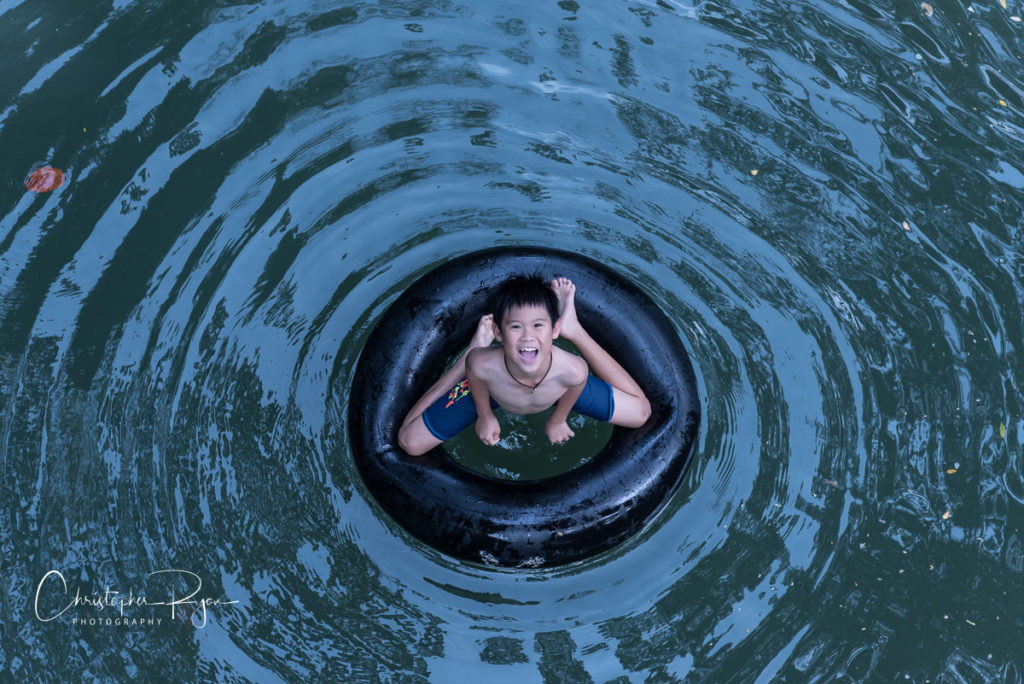 A grinning Pin shot from above.  General LightRoom corrections only. 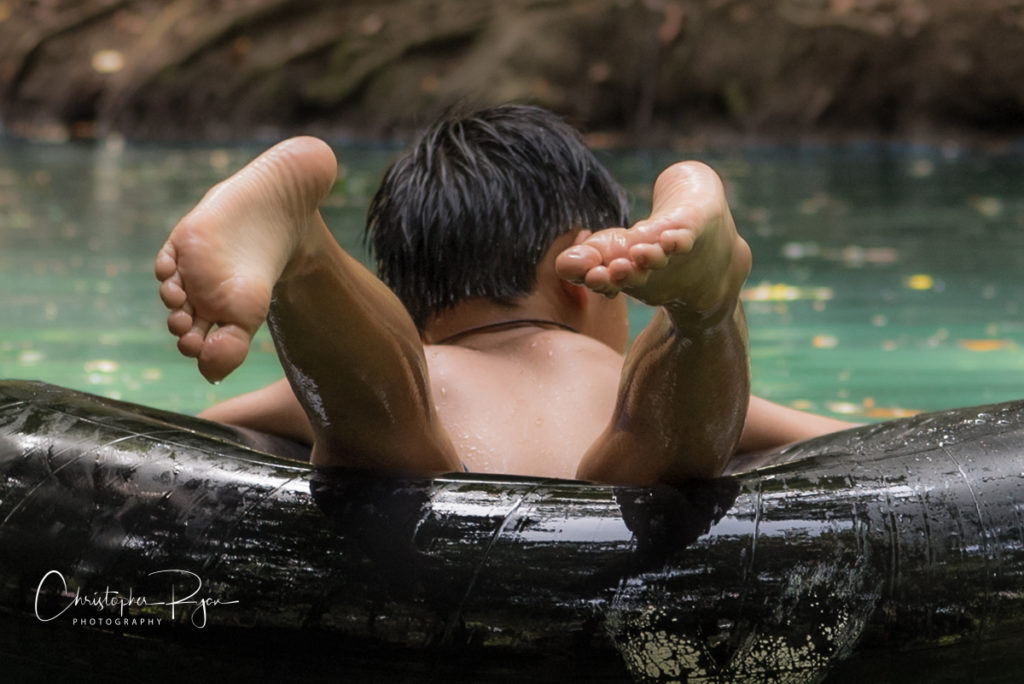 Nothing screams summer or innocence like a barefoot child floating in the water.  I had shown Pin a series of reference images and we were trying to do the “Rock Star” pose and this is him paddling out to the light getting ready for that shot.  This incorporate several layers in Photoshop.  One is to give extra clarity and darken the blacks of the inner tube.  Next one is to reduce the clarity of his skin to give a dreamy appearances.  The water layer changes the color of the water to appear aqua rather than brown and the final layer darkens the bank of the river to balance the black inner tube at the bottom.

Black and White Image in the Water 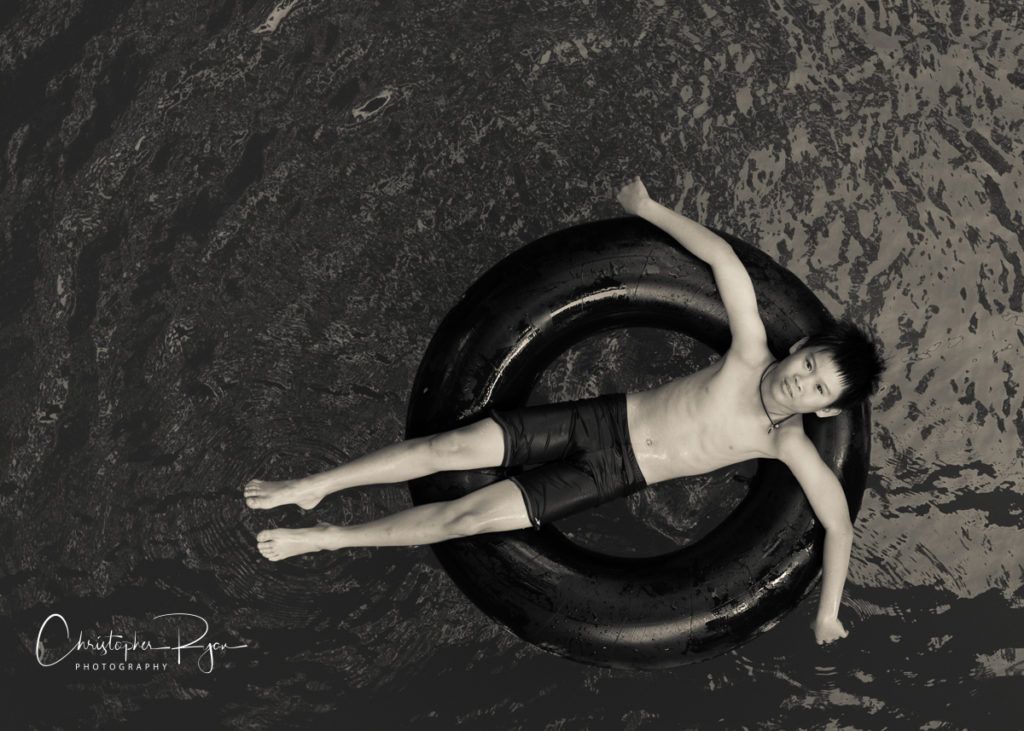 This image was processed with a stock LightRoom filter called Creamtone. 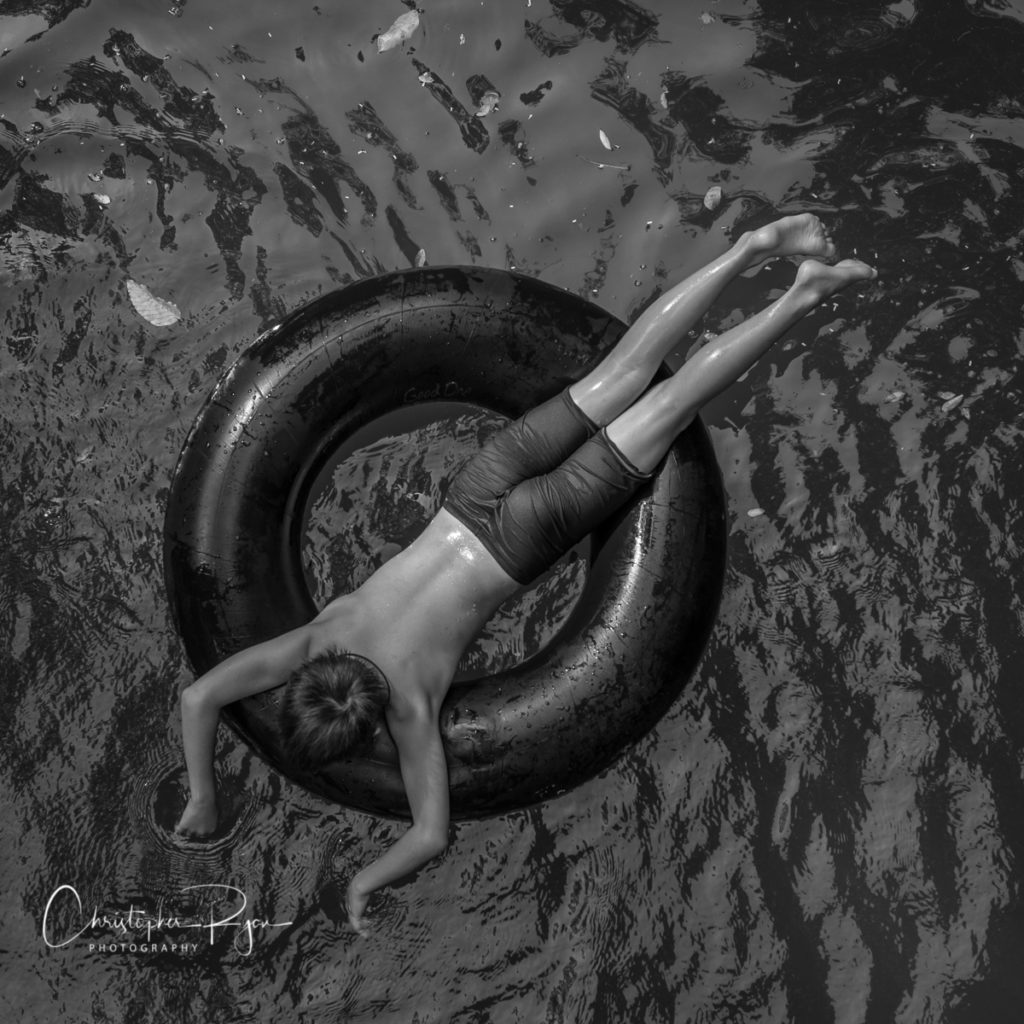 This was Pin’s own natural pose.  I am not even sure if he was aware that I was shooting.  I processed this with my own black and white settings in Lightroom.  The brush tool was used to lighten his hair to help his head stand out a bit from the inner tube. 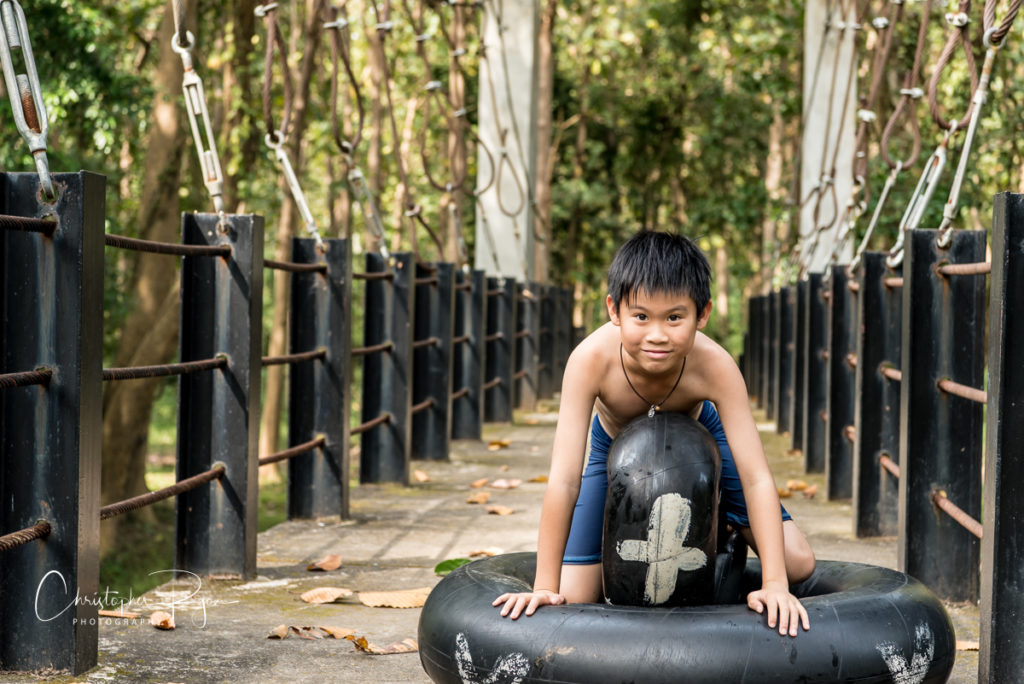 I asked Pin to just be a boy and play with two tubes as if no one were watching.  He placed them in a variety of positions creating chairs and lounges and this is one of my favorites.  Edited in Lightroom only.  Clarity added overall, but reduced on his skin.  Also slightly saturated the colors. 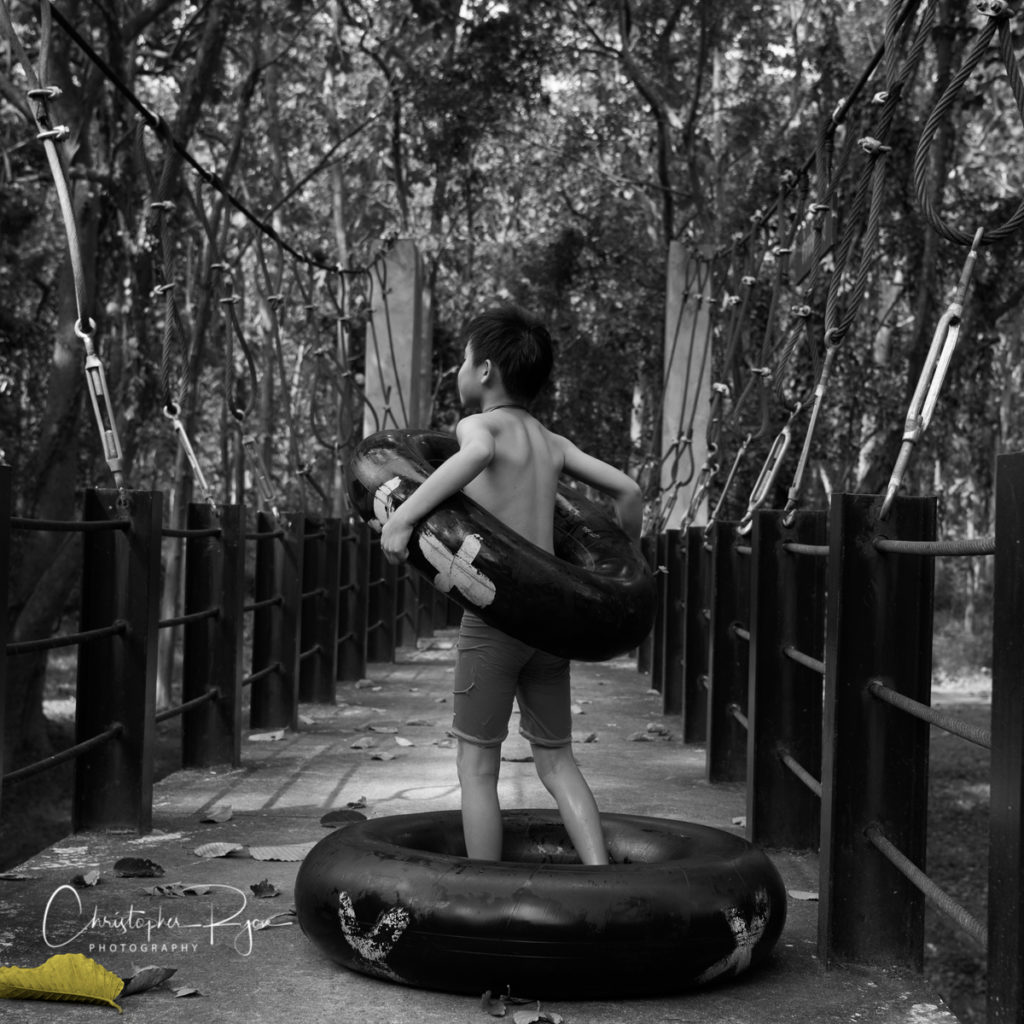 Another one with Pin playing with the tubes on his own.  After basic adjustments in LightRoom I opened this one in PhotoShop to make the large leaf in the foreground yellow and also to change the brightness of his swim suit a bit to separate it from the dark tube. 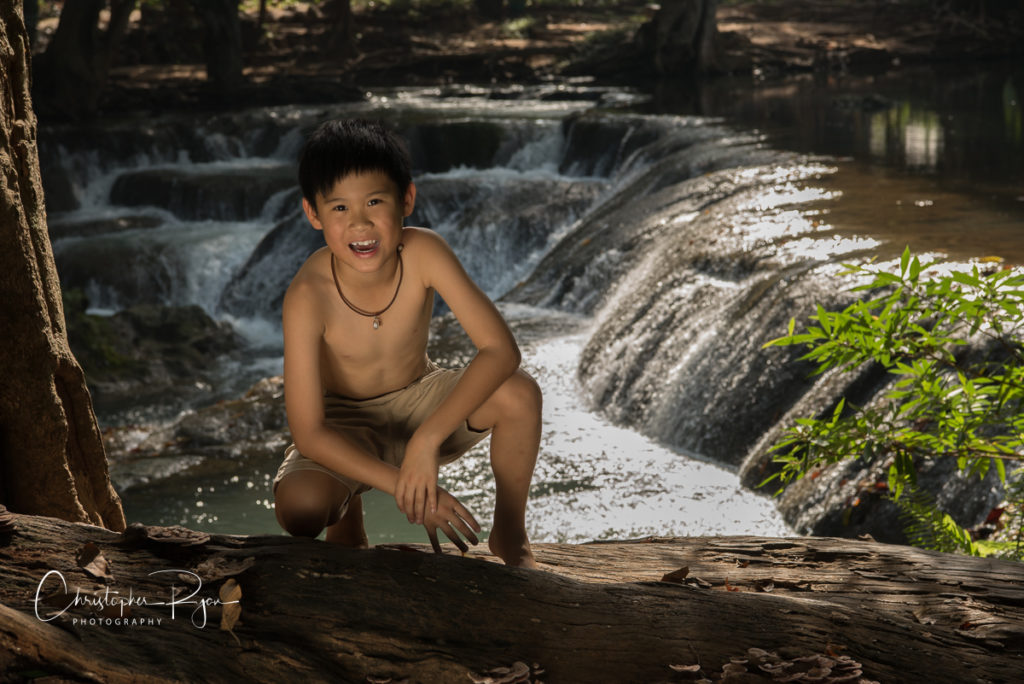 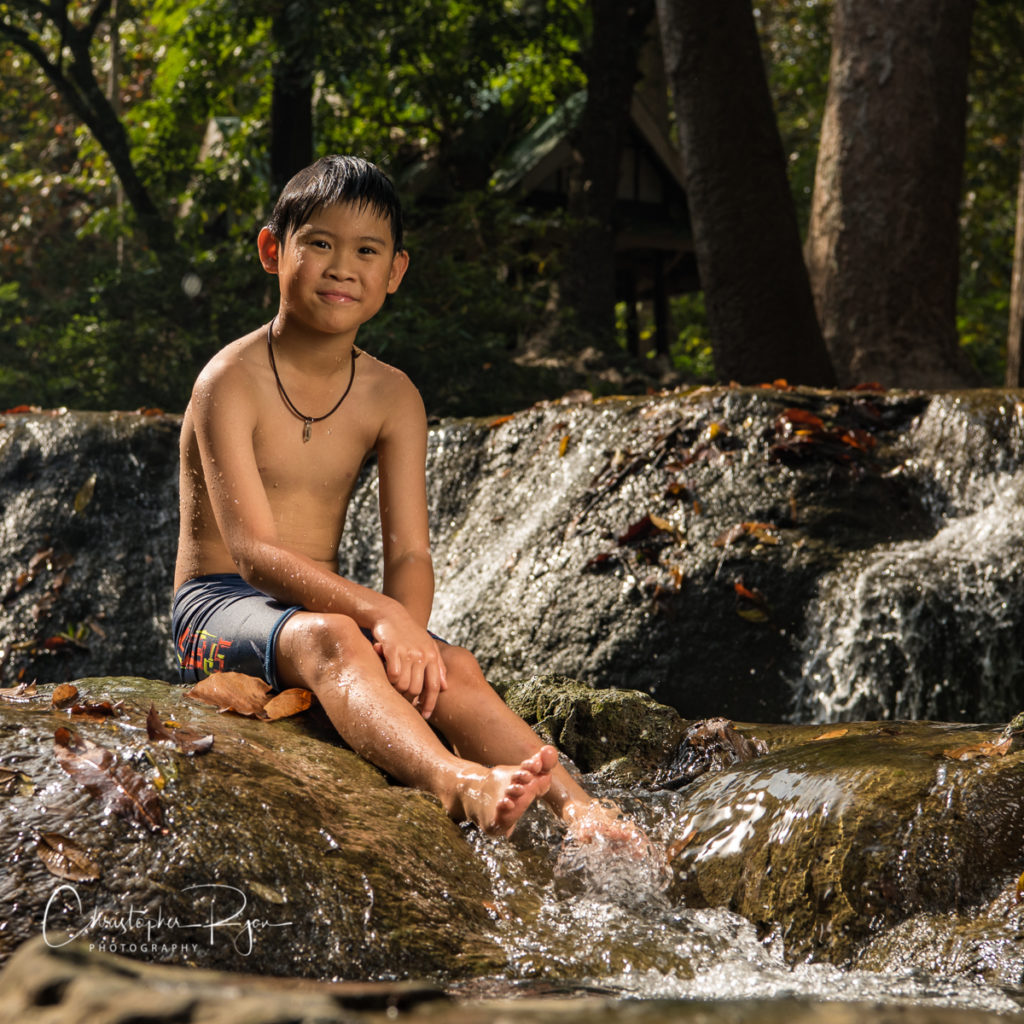 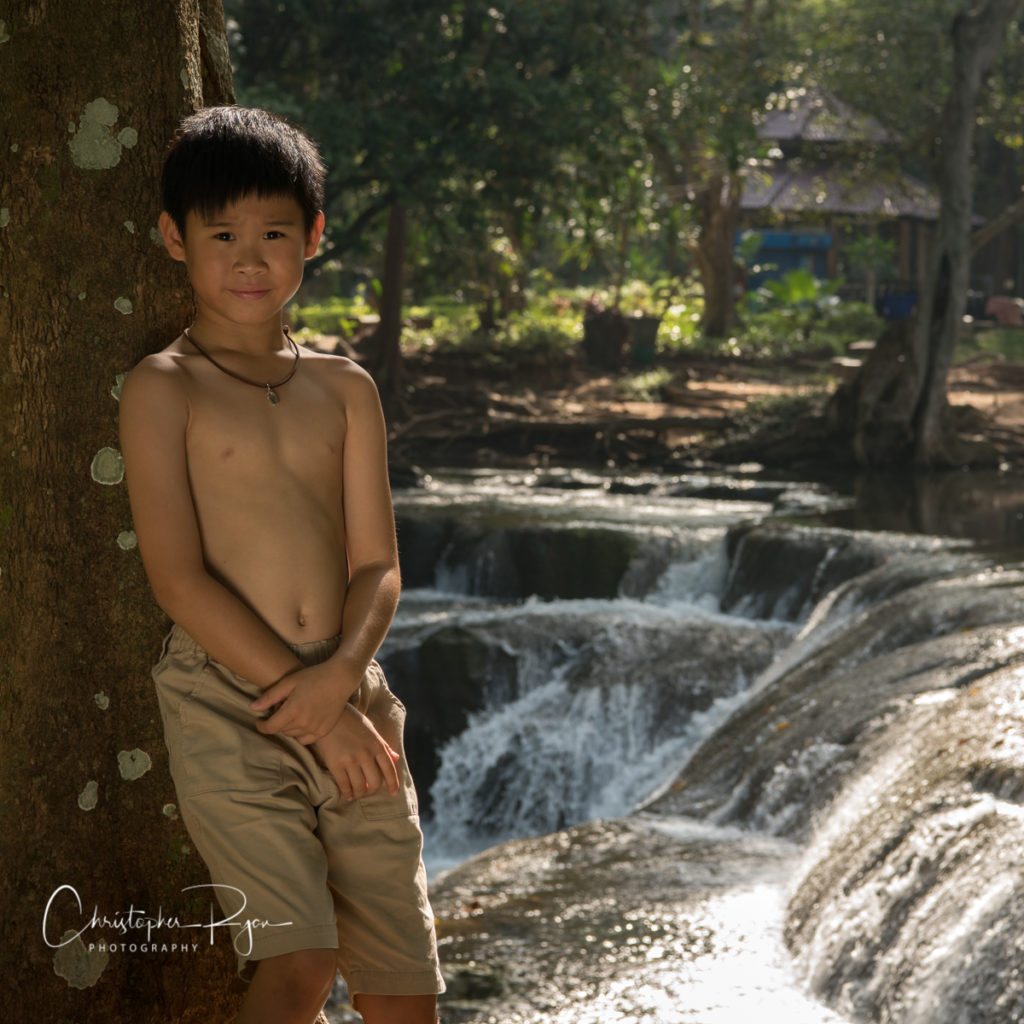 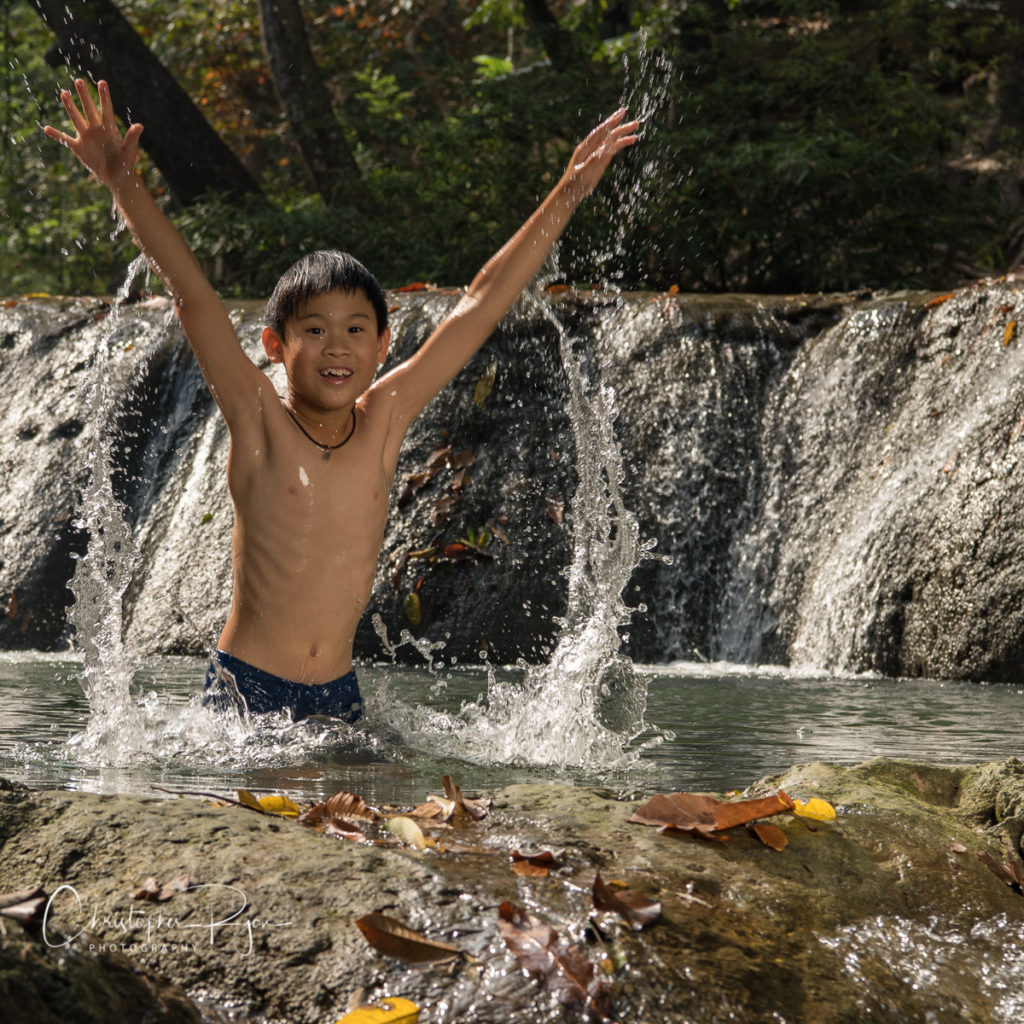 What is the point of going to a beautiful waterfall with a charming young model and not including it in the background of a few shots?  In these images Pin’s Uncle Nezz held a silver reflector to get nice natural light on Pin’s face and body.  All of these were processed in LightRoom. 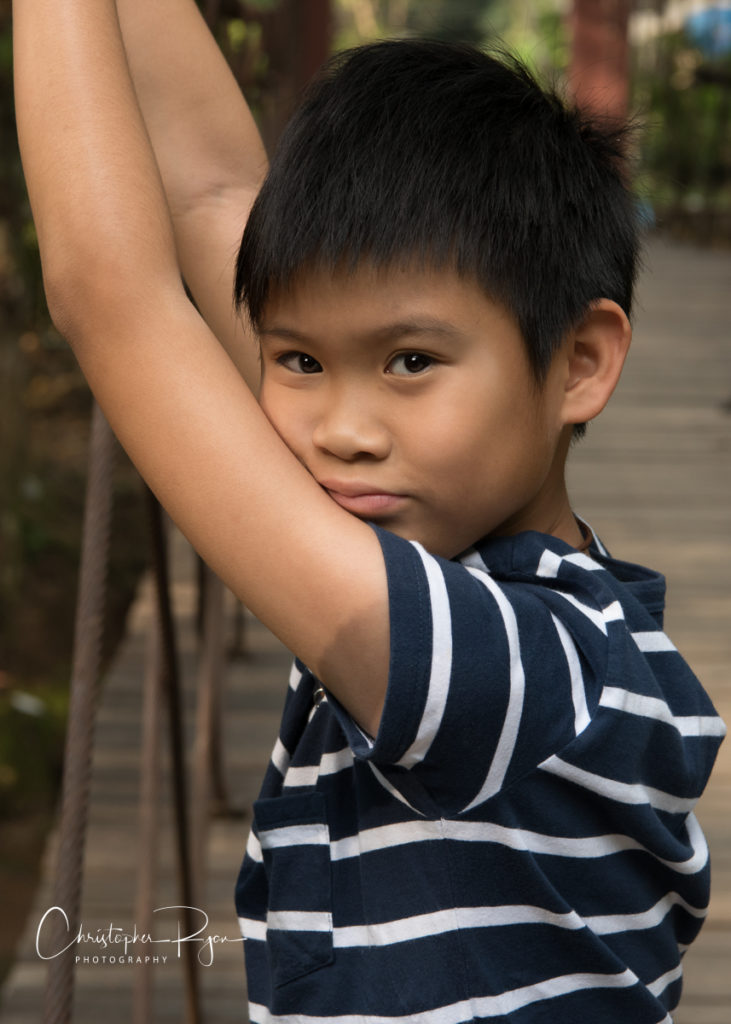 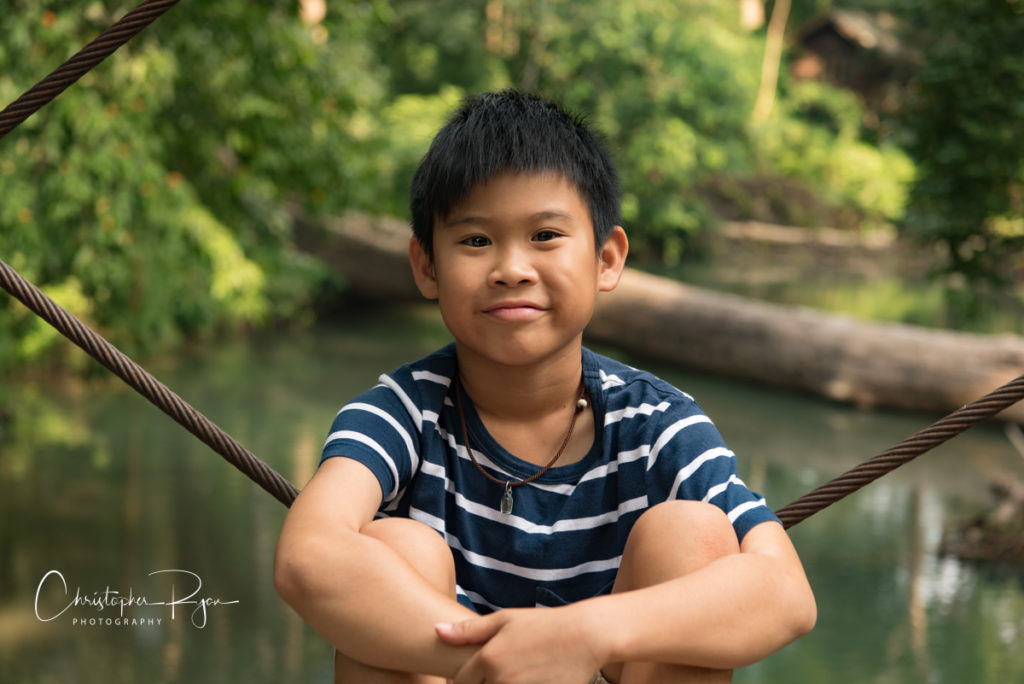 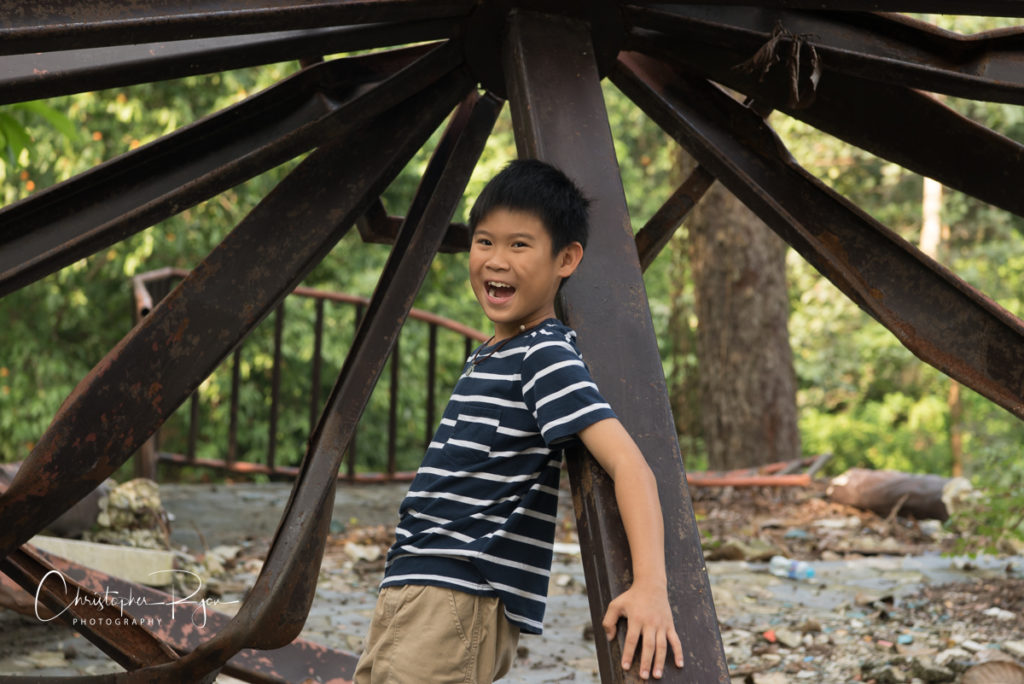 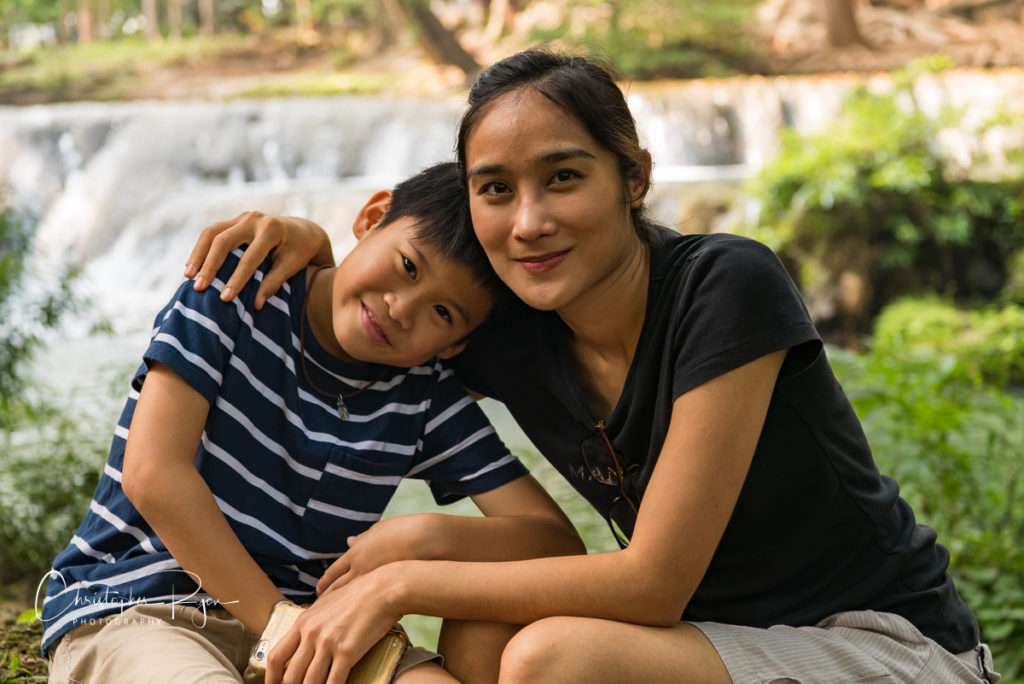 I like to start each session with typical and casual portrait shots.  These were shot near the falls prior to changing into the swimsuit.  The final image is Pin with his mom.  Two of these were edited in Photoshop to add catch a catch light.  Can you guess which ones?