In Youth & Urban Decay, photographer Christopher Ryan captures the beauty of youth set against the backdrop of crumbling, abandoned structures. There is a stark contrast in the passage of time represented in the series – the hopefulness at the beginning of life meets the untold stories of a time that has passed. The boys and girls whose portraits are featured are the stars of the show, while the decaying structures are given one last chance to shine.

This work is a continuation of an earlier self-portrait series by Christopher set in abandoned places. As the artist realized his body was beginning its own timeline of “urban decay,” he decided it was time for his work to evolve. Environmental portraits of children are another area of photography he is passionate about. The inspiration to combine the two fascinating subjects was born from there.

The models in this series are not professionals, however, as much as possible parents are present and the models are compensated for their time. Minimal direction is given to the kids, and often they are left to create their own poses or simply play and explore the locations of the shoots. A good example is the two boys at the abandoned amusement park in Yangon, pushing an old Viking ship back and forth. Their own playfulness resulted in one of his favorite shots of the series.

Youth & Urban Decay is Christopher Ryan’s longest-running series, which started with a shoot in Chiangmai, Thailand in 2016. Since then, he has shot all over Thailand as well as Myanmar, Laos, Indonesia, Colombia, Turkey, and the United States. He expects this project to continue for many years. 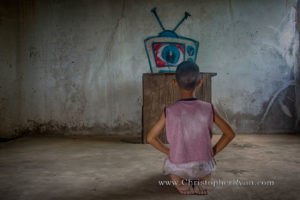 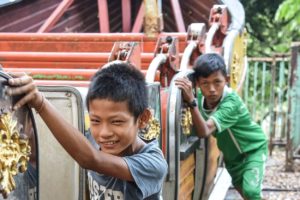